An S-Corp (aka Subchapter S Corporation) is a business entity structure that small businesses can elect to be classified as in order to be taxed in a similar manner to LLCs and general partnerships. It is attractive to small businesses because they can pay reduced taxation, but how is it costing the IRS billions?

An S-Corporation is a variation of a corporation within Subchapter S of Chapter 1 of the Internal Revenue Code. It is a pass-through entity, whereby income and losses ‘pass through’ the business to the owner’s personal tax returns.

Many small businesses use this classification as it allows them to save on Social Security and Medicare taxes, given they satisfy the requirement of having less than 100 owners.

Shareholders within the S-Corp who perform more than minor services for the company, and can demonstrate they have an active role in its day-to-day operations, are its employees for the sake of taxation.

This enables the company to save on Social Security and Medicare taxes as these do not need to be paid on distributions of earnings and profits from the corporation to the shareholders.

Thus, it’s up to the owners of the company to decide how much its employees earn, to an extent. Legislation states that pay employees a ‘reasonable’ salary (earned income) based on their position and industry, with the rest of the business’s profits being distributed as dividends.

By making this ‘reasonable’ division between salary and shares, S-Corps stand to gain a substantial amount of tax savings as share distributions are not taxed.

Why Is this a Problem for the IRS?

That being said, this poses a problem for the IRS. It is considered good to divide these two components such that 60% of the company’s income is salary – any unreasonable divisions incur suspicions of an attempt to avoid taxes.

Unfortunately, many S-Corp owners will go over the top and have their corporations pay no employee compensation at all in order to completely avoid payroll taxes.

The IRS General Inspector recently discovered that over half a million single-shareholder S-Corps paid no salary to their owners, avoiding the reduced tax they are liable for and costing the government billions.

The IRS consequently upped the rigour of its enforcement of the issue and audited thousands of businesses that paid their owners little to no salary.

As punishment for S-Corps attempting to evade payroll taxes by disguising employee salary as corporate shares, the IRS demands such businesses to re-characterize the distributions as salary and require payment of employment taxes and penalties. This can include payroll tax penalties of up to 100% plus negligence penalties.

Unfortunately, the 2018 Tax Cuts and Jobs Act (TCJA) has allowed S-Corps to remain an effective means to avoid Social Security and Medicare tax under it.

However, it introduced a new pass-through tax deduction for S-Corps, who can now deduct up to 20% of their net business income from their income taxes.

If taxable income exceeds this, the business will not qualify for pass-through deduction at all if they are involved in a personal service business (i.e. accounting, law, health etc.), or otherwise limited. 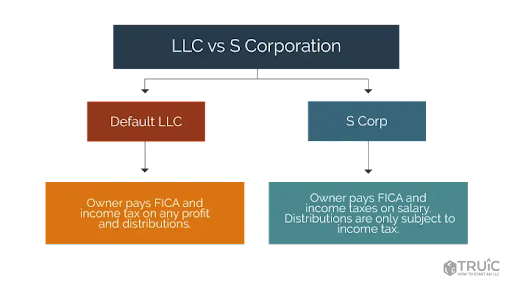 On balance, the issue of preventing this massive tax loss caused by misuse of an S-Corp’s allowances is still a hot one for the IRS that they are keen to find a solution to soon. This problem is extremely prolific due to the simplicity with which an S-Corp can be established.

For more information on the ‘S-Corp vs LLC’ question businesses face at their inception, please refer to The Really Useful Information Company’s free resource in the above link.

What Should I Expect From My Personal Injury Attorney?

The Benefits Of Working From Home In 2022

What Are The Top Benefits Of Selenium Testing Automation Systems?

Contracting With The DOD: 5 Things To Know

What Are The Ways Technology Is Changing Family Law Services