How To Treat Early Stages Of Dupuytrens

Have you ever felt like a storm cloud followed you around day after day and just never let up? This is how patients of a chronic condition feel every day, especially those who suffer from Dupuytren’s Contracture syndrome.

Unfortunately, it is also a condition that can become permanent if not treated properly and as soon as possible.

The condition has a rich history and was formerly called Vikings disease because it is believed to originated with Vikings and spread throughout northern Europe as they intermarried over generations.

What Is Dupuytren’s Contracture?

Dupuytren’s Contracture is a medical condition where there is a thickening of the fibrous tissue underneath your palm.

The skin within the palm forms knots and becomes tender at first. The tenderness eventually fades and scar tissue forms which causes thickening and tightening of the tissue.

Eventually, a chord forms on your palm which causes your fingers to pull back. Typically, the fingers furthest away from your thumb are affected such as the pinky and ring finger.

Your fingers eventually become stiff, bent, and you lose flexibility making it difficult to complete even the simplest of daily activities.

Treating Dupuytrens As Early As Possible:

First you must identify if you suffer from Dupuytren’s Contracture. Are you of northern European descent? This is a risk factor. Men who are Caucasian and over the age of 50 are also more likely to suffer from this condition.

Symptoms include a strange sensation in your palm or if you feel lumps. It feels like knots and strands. You may have pain but that is not always associated with Dupuytrens.

Another way to check if you suffer from the condition is to attempt to lay your palm flat on a hard, flat surface. If you cannot, this may mean you have the syndrome. Can you flatten your fingers? If not, this is another signal that you may have Dupuytrens.

Identifying the syndrome early is very important to the outcome of your condition. If you ignore these symptoms, they become permanent.

How To Take Preventative Measures 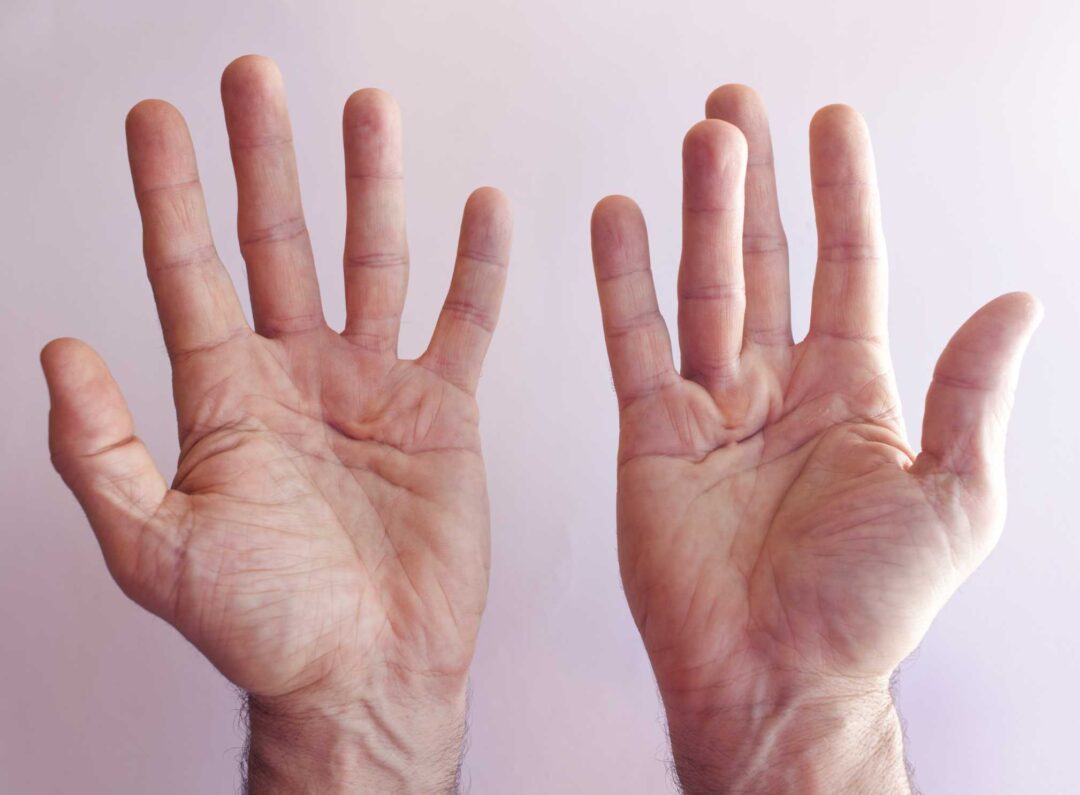 There is no way to prevent Dupuytrens at this time. However, if your family has a history of contracting Dupuytren’s Contracture syndrome or you are a Caucasian male of northern European descent, then you need to be aware of the warning signs above. Refraining from drinking and smoking is one way that may prevent the onset of the condition.

These habits cause changes to the blood vessels, which may lead to the thickening of the palm. And, overall, these are habits that lead to many other chronic health conditions.

Treatment Meant For The Early Stage

Stretching may be a good place to start when you feel the condition is in its early stages. Laying your hand flat on a table and moving one finger at a time like a windshield wiper for 10 repetitions promotes flexibility. Also, adding heat to the area may alleviate symptoms.

Steroid injections also can be used during the early stages of the condition as it will reduce inflammation in the affected area.

A needle will be injected into the nodules on your affected palm which can produce a great deal of relief and returned flexibility by reducing the size of the nodules.

Radiation therapy is another early stage treatment which can help reduce the nodules and return skin to its pre-Dupuytren’s stage. Light energy radiation is administered to the affected area and the nodules break up.

This is only done in early stages and can actually be harmful in the later stages of the condition.

Dupuytren’s Contracture is a condition that is permanent and can unfortunately not be prevented. However, if treated in its early stages the symptoms and affects will be less noticeable and you will be able to keep the flexibility of your hand.

Inflammation and pain will be kept at bay. I cannot state more clearly that early treatment is critical in this condition. If you feel that your Dupuytren’s Contracture is progressing and thickening is increasing, please see your doctor immediately.

Tom is a law student with admiration for writing and research. He loves exploring and discovering diverse topics especially surrounding health. Most importantly, he loves helping people with his articles.

In his free time, Tom loves to walk his dog and enjoys a good time at the club with his friends. He is also an avid reader.