Ekalavvya: An Online Platform for Current Affairs and General Studies

Guys! I am back after a long gap and, I must confess, I did miss this space. But this gap was not without reason, and the “Silence” was not without purpose. This time again I have a new story to tell.

Story telling is becoming a habitual compulsion….almost a necessary evil till the time I find a repeatable and scalable business model. How can I forget that mine is a temporary organization.

I am happy and overwhelmed that the months of planning and execution have produced results, and finally with the unwavering support of our team we have launched Ekalavvya.com, the Online Learning  Platform For Career And Competition. 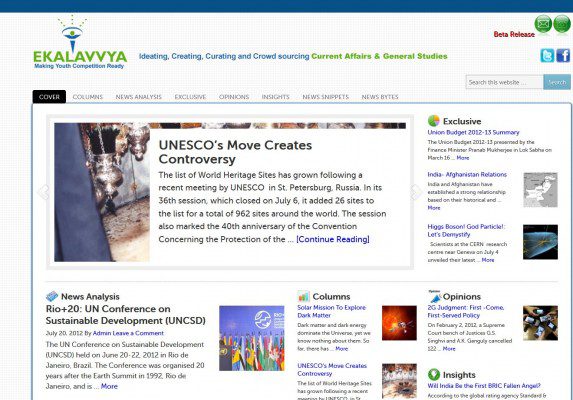 Ekalavvya is launched  on July 09, 2012 with a simple objective  to caters to the Current Affairs and General Studies needs of the Career and Competition Oriented youth.

But, somewhere, this beginning sets off on  a journey of never-ending quest necessitating  so much of responsibilities; responsibilities to understand the needs of  ambitious and aspiring youth, girding up their loins to  face  the tussle and turmoil of competitive examinations; initiatives to match up to their expectations with our very small though committed team.

We keep our fingers crossed. Now the launch of Ekalavvya is not an end in itself,  rather it is a beginning, a beginning to build, promote and keep working and improving Ekalavvya,  and then starts the process of building an audience, the reader base, which will increase slowly, in fives and tens, much to the chagrin of committed team.

I am truly indebted to my team at Knowledge Empowered, especially Pankaj and Dharmvir, who worked really hard to let Ekalavvya happen. I can only say it is only the creatively and intelligently done hard work that can and will ensure our growth trajectory, which to our dismay is at present at the lowest bottom. “After all, tomorrow is another Day”

Somewhere, I read, “Silence is the language of the Angels”. However, a story must be told…and this would be our story of trial and tribulations, fumbles and tumbles, peaks of inflated expectations, troughs of disillusionment….

A story is told as much by speech as by silence. 🙂

Why Does India Lack “The Darwinian Evolution of Startup Hubs”?

Top 10 Movies That Inspire You To Be An Entrepreneur

The “Koohooo!!” Project: Nestles and Nurtures Creative Sparks in Kids.