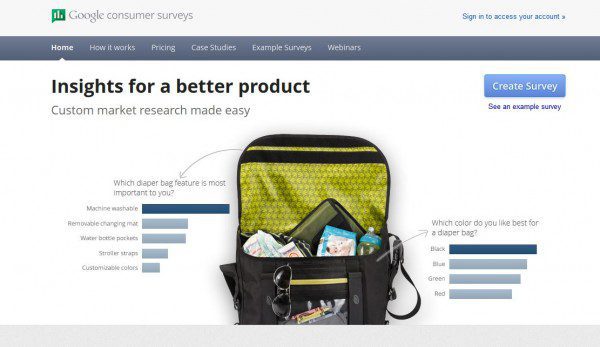 Last month, Google partnered with market research firm Harris Interactive to launch Google Consumer Surveys “to develop and bring to market a new product that allows businesses, both large and small, to compare themselves to industry benchmarks at a fraction of the cost of traditional market research.”

Using Google’s Consumer Surveys platform, Harris Interactive will now collect and distribute industry benchmarks. Businesses will be able to run their own surveys (for a price) and benchmark themselves against their competitors.

Google Consumer Surveys is meant to make consumer market surveys easy for businesses. The interesting twist here is that users virtually have to answer your question as Google is positioning its surveys as alternatives to traditional newspaper paywalls. Instead of paying, users have to answer a few questions to get to the content they are interested in. Marketers can use these “surveywalls“ to ask basic multiple-choice questions or to run more complex studies; Google charges $0.10 per response for the general U.S. population and $0.50 per response from custom audiences (a portion of which it then passes on to the site owners).

How To Make Money With Dropshipping

The Value In Investing In Digital Marketing For Ecommerce

8 Things You Should Know If Starting a Clothing Business

How To Use Bubble Wrap To Ship Fragile Items

Which Is The Best Cheapest Online Shopping Site?