Top 70 Most Courageous Quotes To Spark Your Inner Brave

Be Strong And Courageous Quotes

Courage is something that you do not get from your birth. It is a trait that a person develops as time passes. The problems in his life make him courageous. However, some people have never felt the pain in their life. It is hard for them to understand how to be brave.

For them, we have compiled these most courageous quotes. These quotes are the perfect guide they require for them to become stronger. Have a look at them and gain the confidence you need. You can even share them with others who want help. Hopefully, you will become insightful and capable of handling challenging situations.

Be Strong And Courageous Quotes 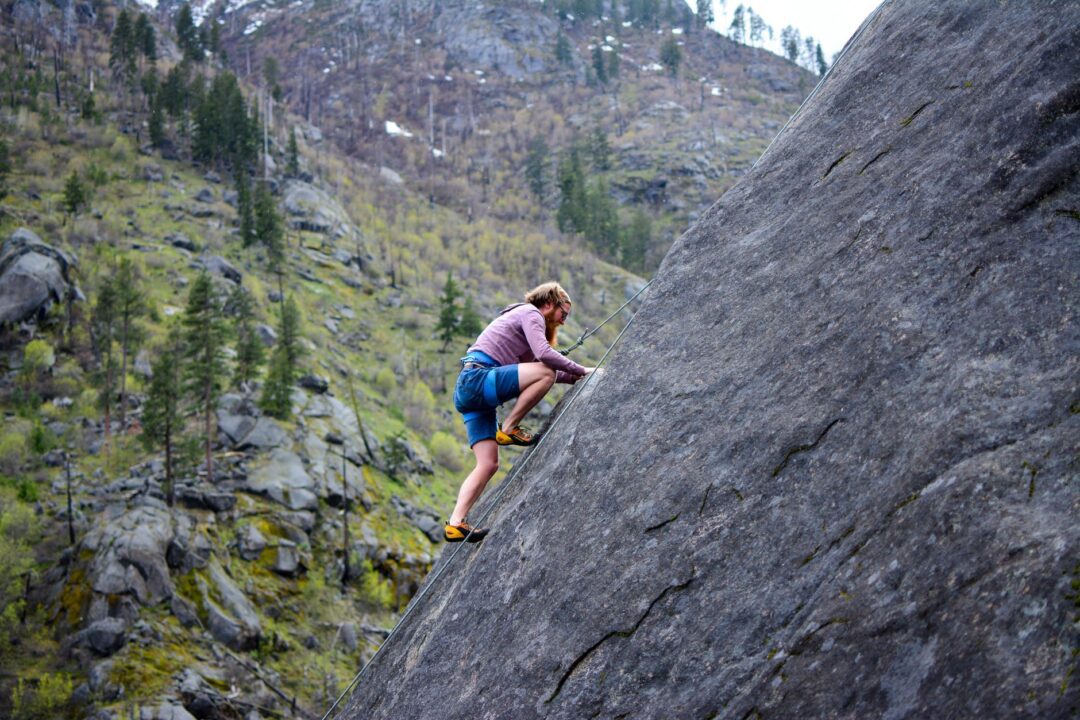 3. “You gain strength, courage, and confidence by every experience in which you really stop to look fear in the face. You must do the thing which you think you cannot do.” -Eleanor Roosevelt

5. “Courage isn’t having the strength to go on – it is going on when you don’t have strength.” -Napoléon Bonaparte

Courageous Quotes For Her

6. “Being deeply loved by someone gives you strength, while loving someone deeply gives you courage.”-Lao Tzu 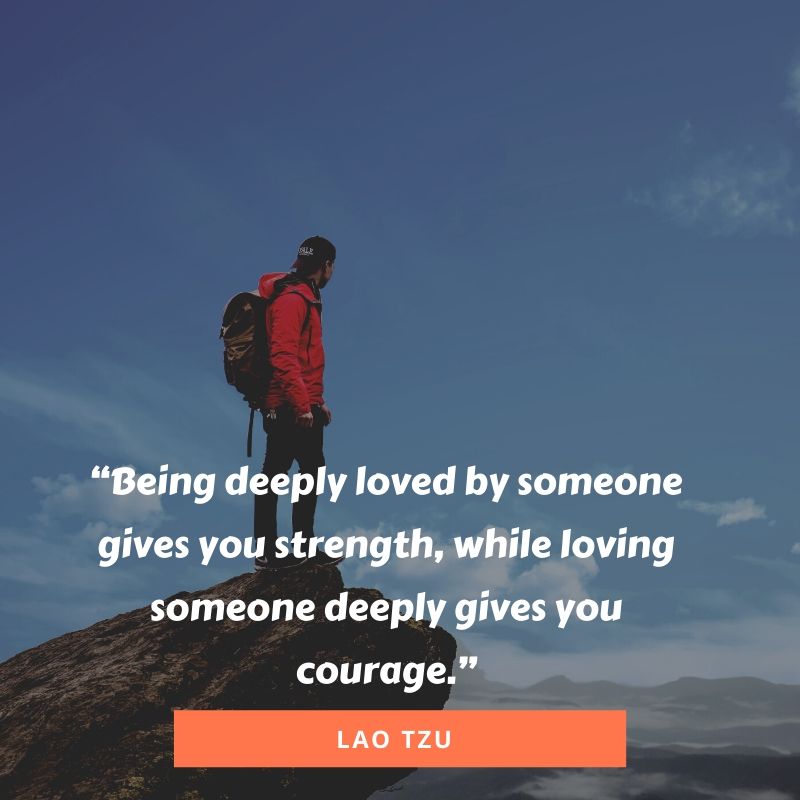 8. “Being deeply loved by someone gives you strength, while loving someone deeply gives you courage.” -Lao Tzu

9. “Of all forms of caution, caution in love is perhaps the most fatal to true happiness.” -Bertrand Russell

10. “Do the thing you fear and the death of fear is certain.” -Ralph Waldo Emerson

Courageous Quotes For Him

11. “Success is not final, failure is not fatal: it is the courage to continue that counts.”-Winston S. Churchill 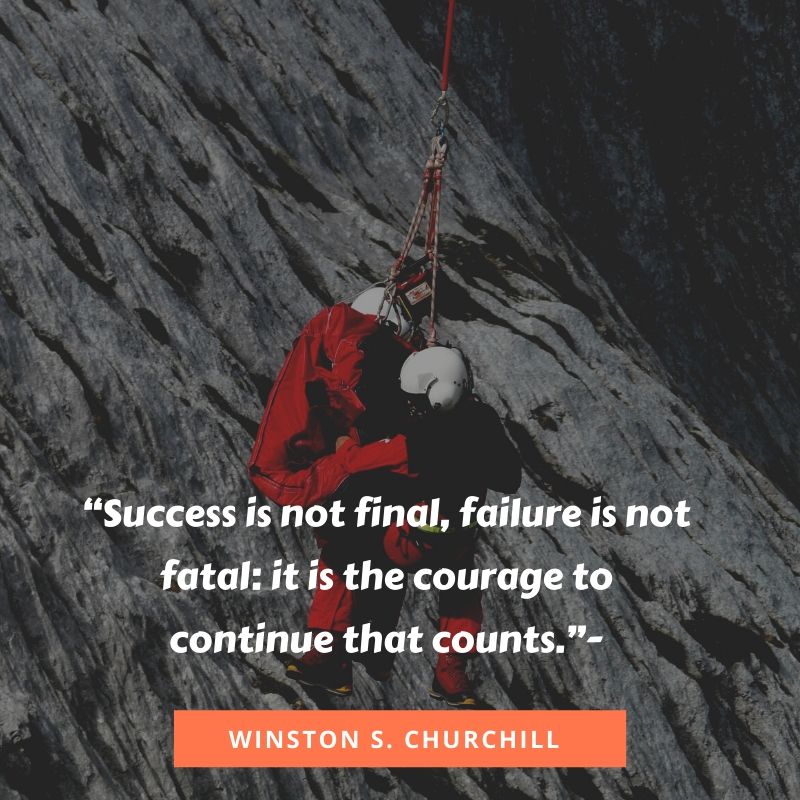 12. “It takes courage to grow up and become who you really are.”-E.E. Cummings

13. “We believe in ordinary acts of bravery, in the courage that drives one person to stand up for another.”-Veronica Roth

14. “I wanted you to see what real courage is, instead of getting the idea that courage is a man with a gun in his hand. It’s when you know you’re licked before you begin, but you begin anyway and see it through no matter what.- Atticus Finch”-Harper Lee

16. “The most courageous act is still to think for yourself. Aloud.” -Coco Chanel 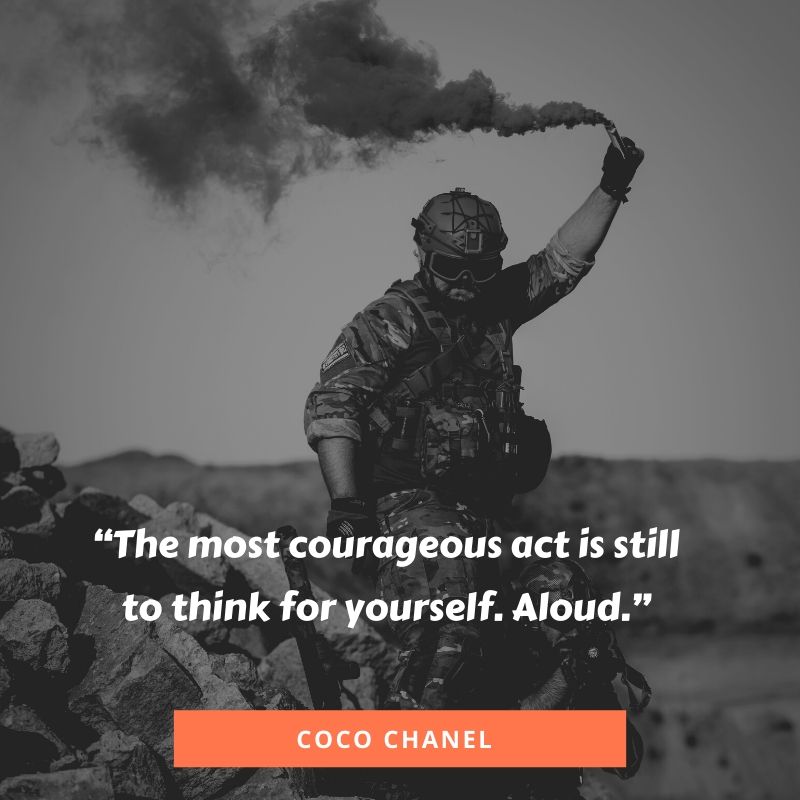 17. “Above all, be the heroine of your life, not the victim.”-Nora Ephron

18. “The best way out is always through.” -Robert Frost

19. “Don’t get discouraged; it is often the last key in the bunch that opens the lock.” -Unknown

20. “You cannot swim for new horizons until you have courage to lose sight of the shore.” -William Faulkner

Quotes On Courage And Determination

21. “Keep your fears to yourself but share your courage with others.” -Robert Louis Stevenson 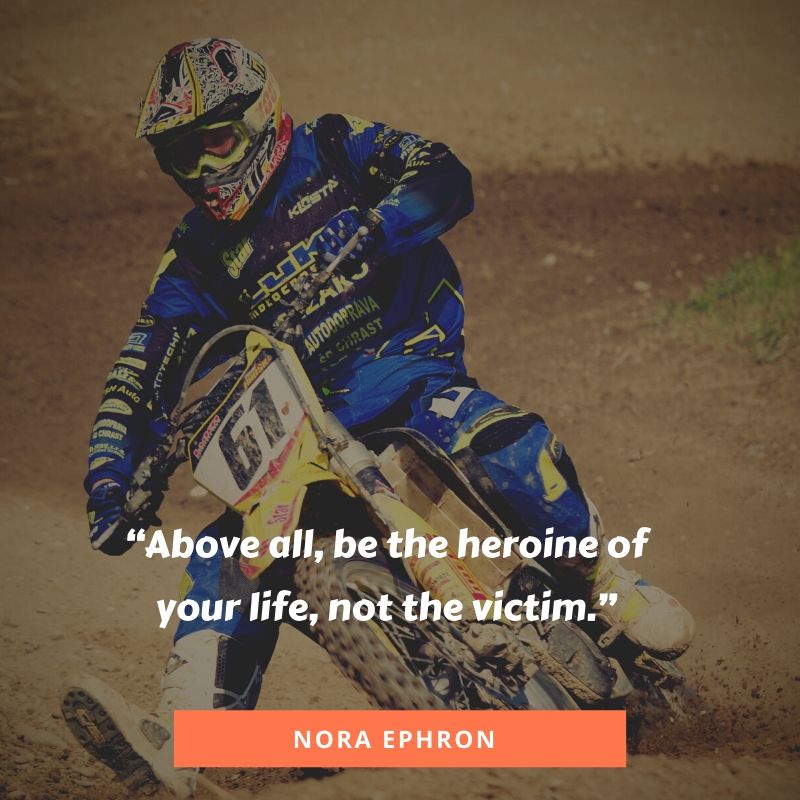 22. “Bran thought about it. ‘Can a man still be brave if he’s afraid?’
‘That is the only time a man can be brave,’ his father told him.”-George R.R. Martin

23. “Courage is the most important of all the virtues because without courage, you can’t practice any other virtue consistently.”-Maya Angelou

25. “It takes courage to grow up and become who you really are.” -E.E. Cummings

26. “You cannot swim for new horizons until you have courage to lose sight of the shore.”-William Faulkner 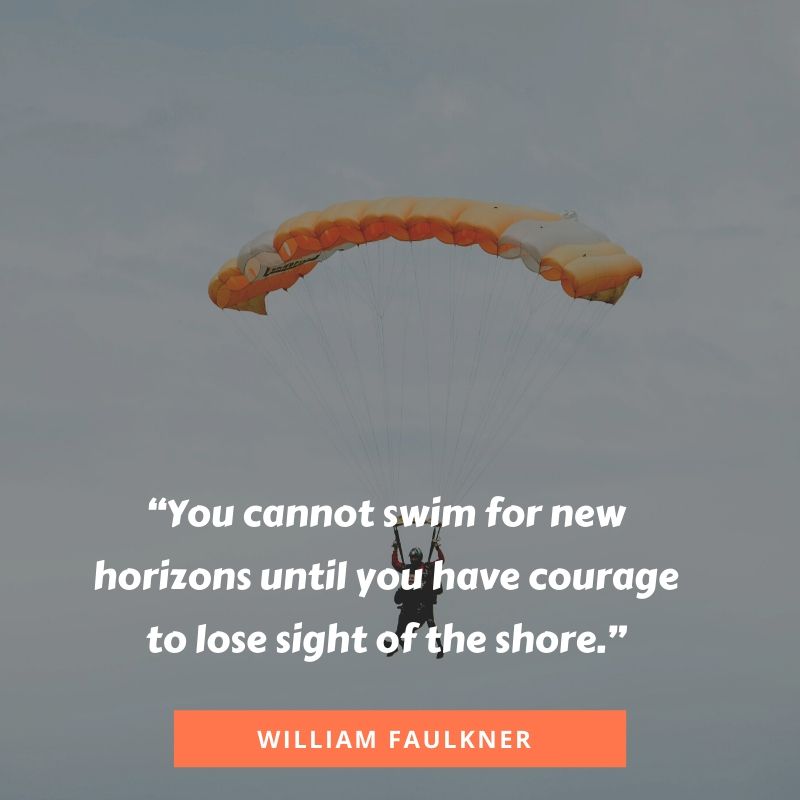 27. “Everyone has talent. What’s rare is the courage to follow it to the dark places where it leads.”-Erica Jong

29. “To overcome fear, here’s all you have to do: realize the fear is there, and do the action you fear anyway.” -Peter McWilliams

30. “Trust the still, small voice that says, “this might work and I’ll try it.” -Diane Mariechild

31. “Don’t be afraid of your fears. They’re not there to scare you. They’re there to let you know that something is worth it.”-C. JoyBell C. 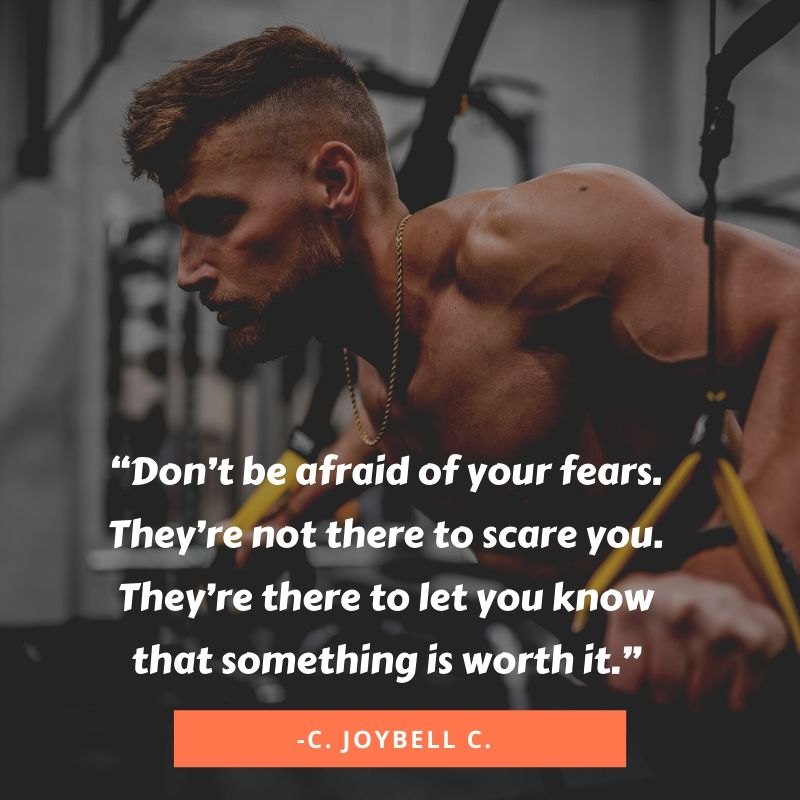 32. “Confront the dark parts of yourself, and work to banish them with illumination and forgiveness. Your willingness to wrestle with your demons will cause your angels to sing.”-August Wilson

33. “So many of our dreams at first seem impossible, then they seem improbable, and then, when we summon the will, they soon become inevitable.” -Christopher Reeve

34. “I learned that courage was not the absence of fear, but the triumph over it. The brave man is not he who does not feel afraid, but he who conquers that fear.” -Nelson Mandela 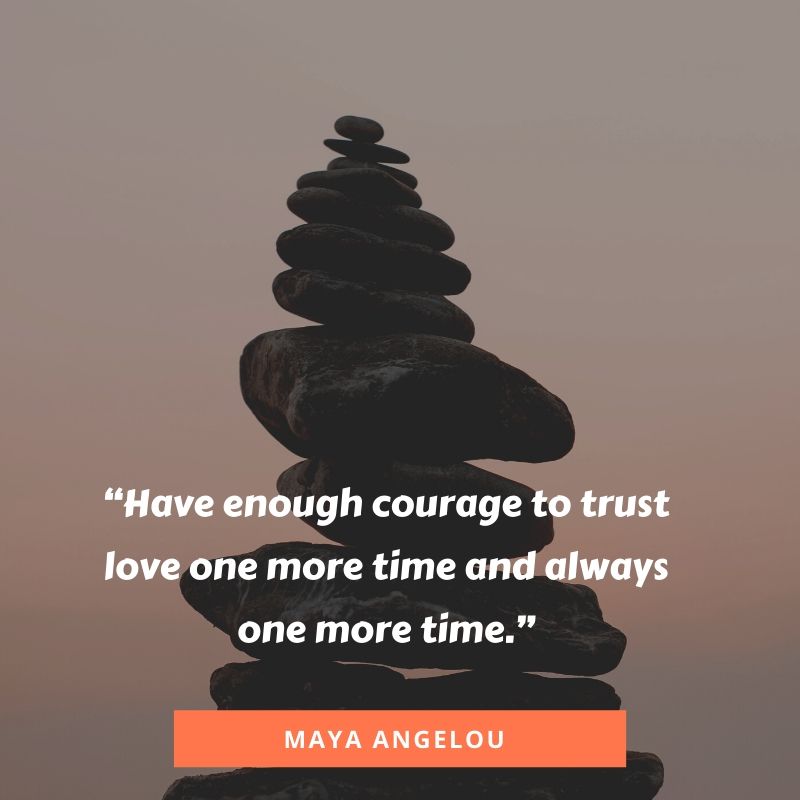 36. “There is a stubbornness about me that never can bear to be frightened at the will of others. My courage always rises at every attempt to intimidate me.”-Jane Austen

38. “Life shrinks or expands in proportion to one’s courage.”-AnaÃ¯s Nin

39. “Don’t be satisfied with stories, how things have gone with others. Unfold your own myth.”-Jalaluddin Rumi 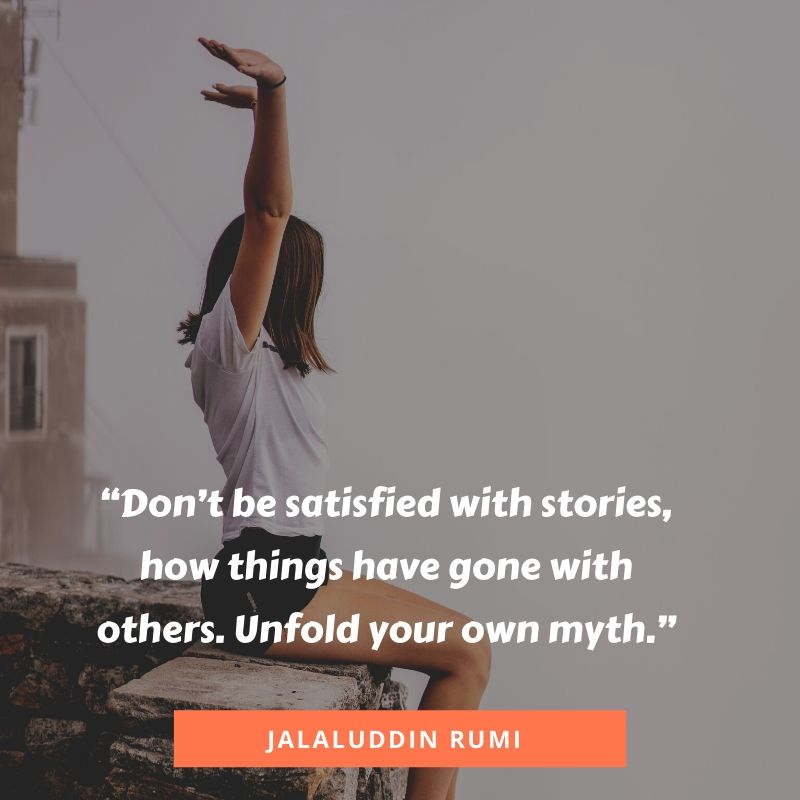 41. “Nothing in life is to be feared, it is only to be understood. Now is the time to understand more, so that we may fear less.” -Marie Curie

42. “The greatest test of courage on the earth is to bear defeat without losing heart.” -R. G. Ingersoll

43. “Curiosity will conquer fear even more than bravery will.” -James Stephens

44. “Courage is resistance to fear, mastery of fear – not absence of fear.”-Mark Twain 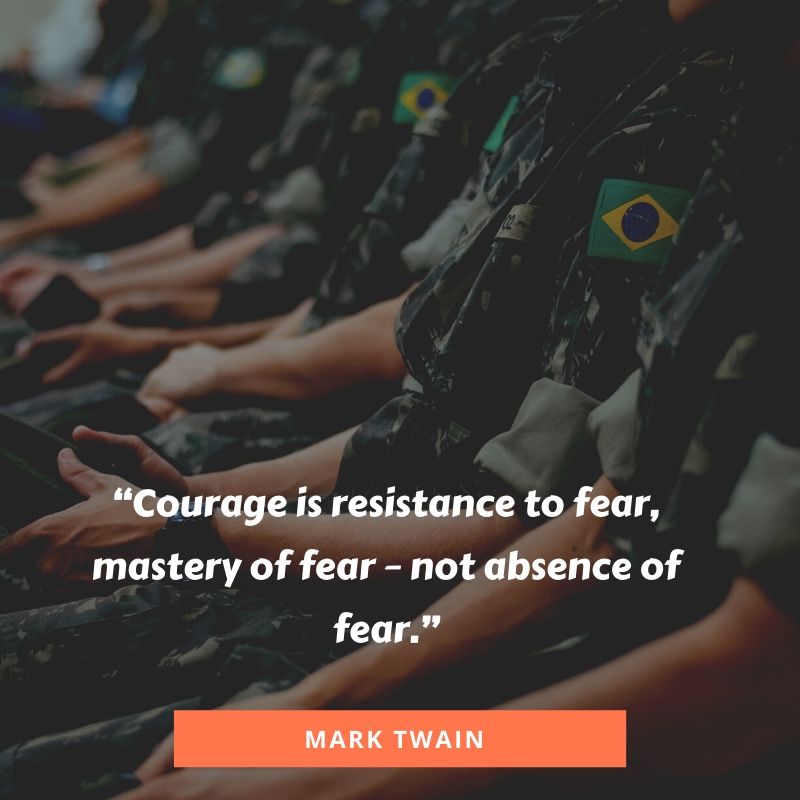 45. “When we least expect it, life sets us a challenge to test our courage and willingness to change; at such a moment, there is no point in pretending that nothing has happened or in saying that we are not yet ready. The challenge will not wait. Life does not look back. A week is more than enough time for us to decide whether or not to accept our destiny.”-Paulo Coelho

48. “With enough courage, you can do without a reputation.”-Margaret Mitchell 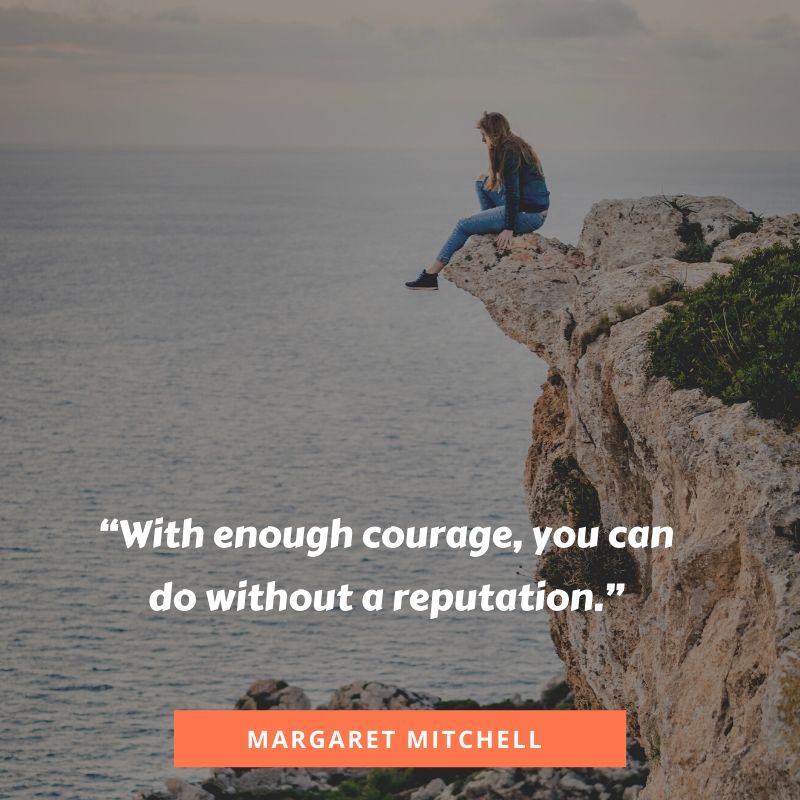 49. “Believe you can and you’re halfway there.” -Theodore Roosevelt

50. “Courage is resistance to fear, mastery of fear – not absence of fear.” -Mark Twain

52. “Anyone can hide. Facing up to things, working through them, that’s what makes you strong.” -Sarah Dessen

53. “All happiness depends on courage and work.”-HonorÃ de Balzac 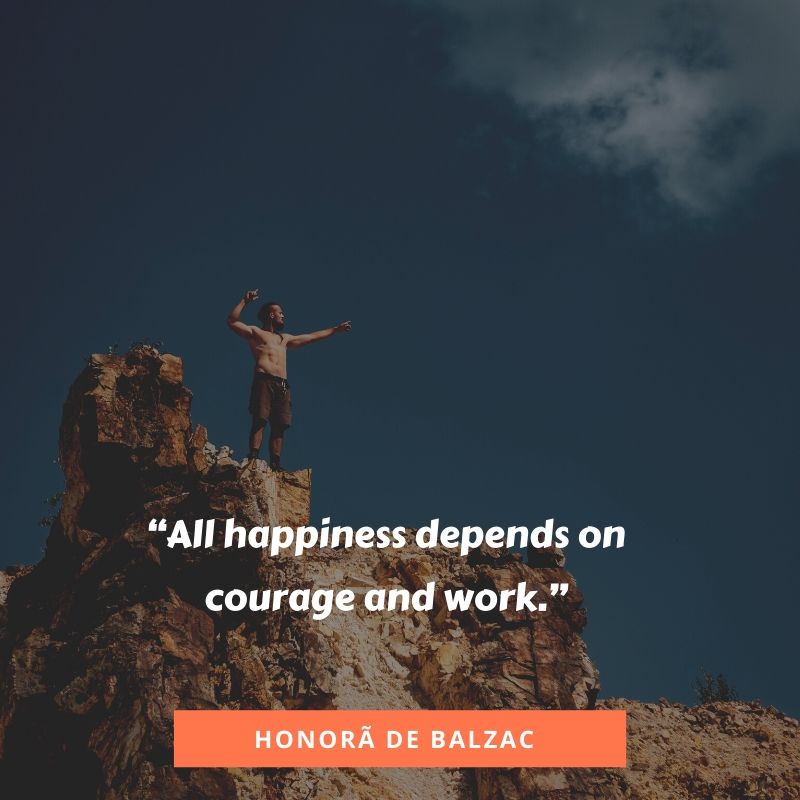 54. “I learned that courage was not the absence of fear, but the triumph over it. The brave man is not he who does not feel afraid, but he who conquers that fear.”-Nelson Mandela

55. “The two hardest tests on the spiritual road are the patience to wait for the right moment and the courage not to be disappointed with what we encounter.”-Paulo Coelho

56. “Your attitude, not your aptitude, will determine your altitude.” -Zig Ziglar

57. “Courage is going from failure to failure without losing enthusiasm.” -Winston Churchill

58. “Freedom lies in being bold.”-Robert Frost 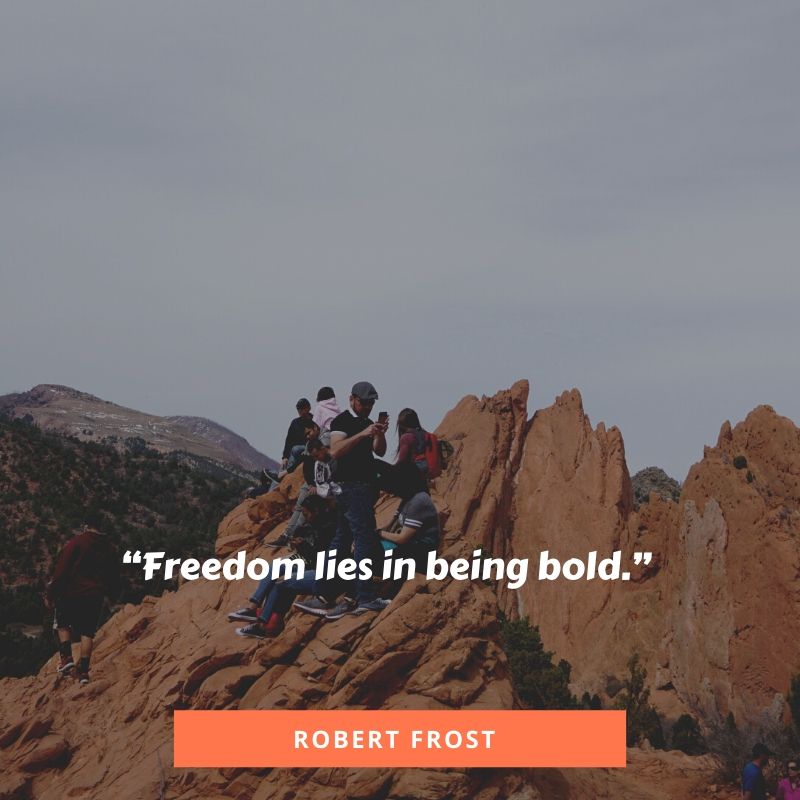 59. “We can’t be afraid of change. You may feel very secure in the pond that you are in, but if you never venture out of it, you will never know that there is such a thing as an ocean, a sea. Holding onto something that is good for you now, may be the very reason why you don’t have something better.”-C. JoyBell C.

60. “We are more often frightened than hurt; and we suffer more from imagination than from reality.” -Seneca

61. “It’s your life; you don’t need someone’s permission to live the life you want. Be brave to live from your heart.” -Roy T. Bennett

62. “Courage isn’t having the strength to go on – it is going on when you don’t have strength.”-Napolon Bonaparte 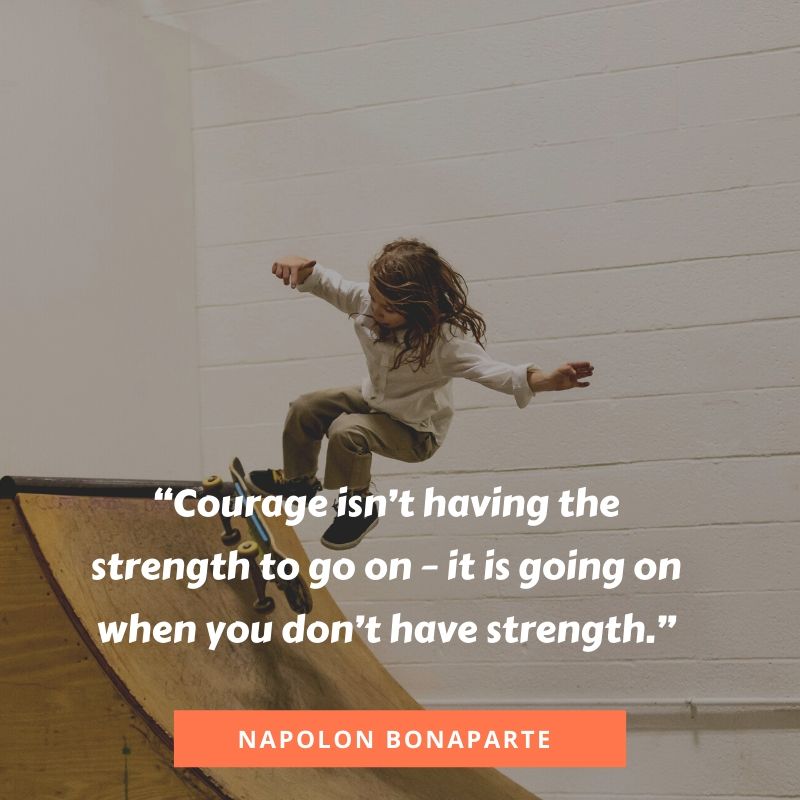 63. “Some people believe holding on and hanging in there are signs of great strength. However, there are times when it takes much more strength to know when to let go and then do it.” -Ann Landers

64. “Man cannot discover new oceans unless he has the courage to lose sight of the shore.” -Andre Gide

65. “The most courageous act is still to think for yourself. Aloud.” -Coco Chanel

66. “Always do the things you fear the most. Courage is an acquired taste, like caviar.” -Erica Jong

67. “What would life be if we had no courage to attempt anything?” -Vincent Van Gogh

70. “One of the greatest regrets in life is being what others would want you to be, rather than being yourself.” -Shannon L. Alder

Here are some most courageous quotes that you need to break out of the fear. These will help you gain more belief in your actions. You would no longer be afraid of striking out if anyone tries to scare you. Read and practice them to have a fruitful life ahead.

Other Posts on Attitude and Happiness Related Quotes

How APIs Can Boost Your E-Commerce Business