In complex systems like a business (or a brain), cause and effect may not always be as clear as the relationship between the light switch and the light bulb. There are time-delayed and time-dependent relationships in which huge effort may yield little in the near-term, or in which high output today may be the result of actions taken a long time ago.

According to the theory of the diffusion of innovations — an attempt to understand how, why and at what rate ideas and technology spread throughout cultures — diffusion or adoption is relatively slow at the outset until a tipping point is reached. Then you enter hypergrowth, which typically happens somewhere between 10-15% of market penetration. Saturation is reached at 90%+.

As we look to develop competence within a new domain of expertise, moving up a personal learning curve, initially progress is slow. But through deliberate practice, we gain traction, entering into a virtuous cycle that propels us into a sweet spot of accelerating competence and confidence. Then, as we approach mastery, the vicious cycle commences: the more habitual what we are doing becomes, the less we enjoy the “feel good” effects of learning: these two cycles constitute the S-curve. 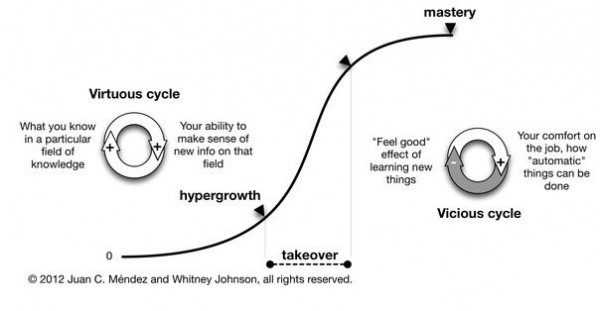 Just as understanding the S-curve can keep discouragement at bay as we build new knowledge, it can also help us understand why ennui kicks in once we reach the plateau. As we approach mastery, our learning rate decelerates, and while the ability to do something automatically implies competence, it also means our brains are now producing less of the feel-good neurotransmitters — the thrill ride is over. 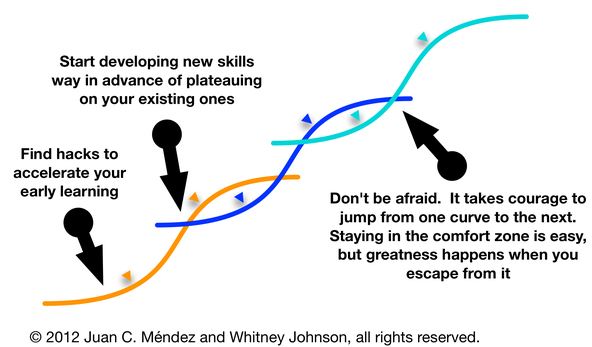 The S-curve mental model makes a compelling case for personal disruption. We may be quite adept at doing the math around our future when things are linear, but neither business nor life is linear, and ultimately what our brain needs, even requires, is the dopamine of the unpredictable. More importantly, as we inhabit an increasingly zig-zag world, the best curve you can throw the competition is your ability to leap from one learning curve to the next.

Excerpts from “Throw Your Life a Curve”, Harvard Business Review

Why Social LMS Is Better Than Classroom Tools

How To Pace, When To Pause And How Long To Persevere!!!

Whatever You Do You Have To Keep Moving Forward