Milan Kundera’s novels delve deeply into the the thoughts, feelings and beliefs of the individual…In his masterpiece, The Unbearable Lightness of Being, Kundera tells the story of a love triangle against the backdrop of the Prague Spring. The epic turned Kundera into an international literary star when it was published in 1984.

He has not published a novel for over a decade, but his name is often whispered as a contender for the Nobel prize in literature.

Here, we present some of the best Milan Kundera quotes about life, who has a philosopher’s roving mind and a storyteller’s smooth tongue. 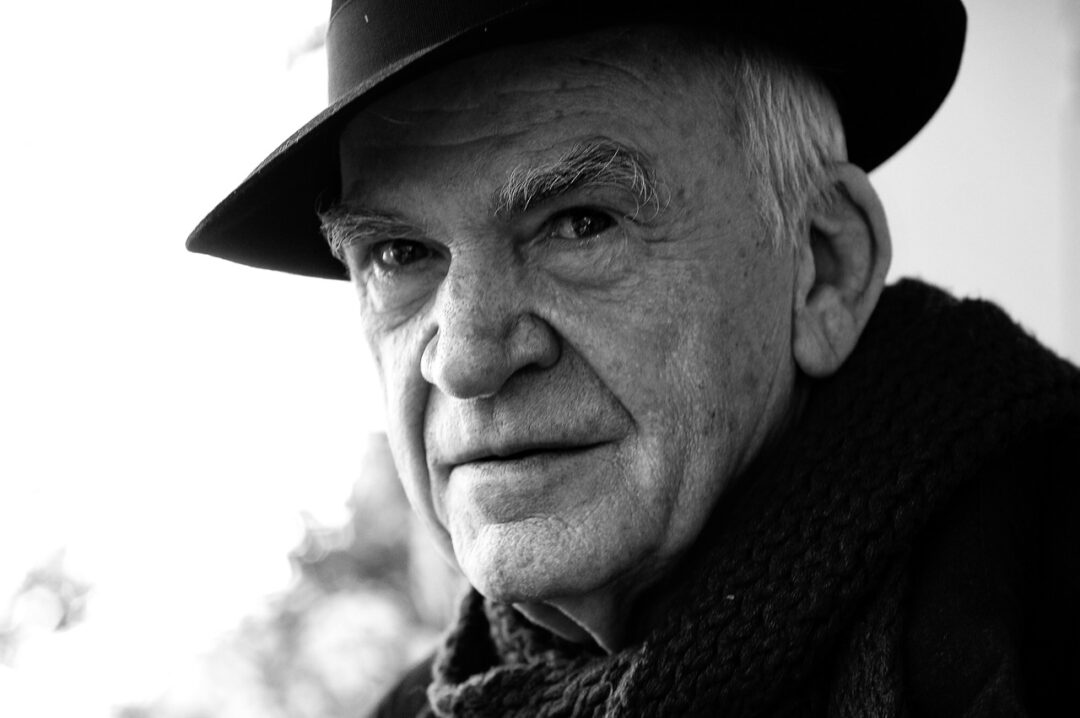 2. “You can’t measure the mutual affection of two human beings by the number of words they exchange.”-Milan Kundera

3. “When the heart speaks, the mind finds it indecent to object.”-Milan Kundera

4. “Anyone whose goal is ‘something higher’ must expect someday to suffer vertigo. What is vertigo? Fear of falling? No, Vertigo is something other than fear of falling. It is the voice of the emptiness below us which tempts and lures us, it is the desire to fall, against which, terrified, we defend ourselves.”-Milan Kundera

5. “Dogs are our link to paradise. They don’t know evil or jealousy or discontent. To sit with a dog on a hillside on a glorious afternoon is to be back in Eden, where doing nothing was not boring–it was peace.”-Milan Kundera

7. “Love is the longing for the half of ourselves we have lost.”-Milan Kundera

8. “For there is nothing heavier than compassion. Not even one’s own pain weighs so heavy as the pain one feels with someone, for someone, a pain intensified by the imagination and prolonged by a hundred echoes.”-Milan Kundera

9. “But when the strong were too weak to hurt the weak, the weak had to be strong enough to leave.”-Milan Kundera

10. “The Greek word for “return” is nostos. Algos means “suffering.” So nostalgia is the suffering caused by an unappeased yearning to return.”-Milan Kundera

11. “The heaviest of burdens crushes us, we sink beneath it, it pins us to the ground. But in love poetry of every age, the woman longs to be weighed down by the man’s body. The heaviest of burdens is therefore simultaneously an image of life’s most intense fulfillment. The heavier the burden, the closer our lives come to the earth, the more real and truthful they become.

Conversely, the absolute absence of burden causes man to be lighter than air, to soar into heights, take leave of the earth and his earthly being, and become only half real, his movements as free as they are insignificant. What then shall we choose? Weight or lightness?”-Milan Kundera

12. “In the sunset of dissolution, everything is illuminated by the aura of nostalgia, even the guillotine.”-Milan Kundera

13. “He suddenly recalled from Plato’s Symposium: People were hermaphrodites until God split then in two, and now all the halves wander the world over seeking one another. Love is the longing for the half of ourselves we have lost.”-Milan Kundera

14. “A person who longs to leave the place where he lives is an unhappy person.”-Milan Kundera

15. “We can never know what to want, because, living only one life, we can neither compare it with our previous lives nor perfect it in our lives to come.”-Milan Kundera

16. “She had an overwhelming desire to tell him, like the most banal of women. Don’t let me go, hold me tight, make me your plaything, your slave, be strong! But they were words she could not say.

The only thing she said when he released her from his embrace was, “You don’t know how happy I am to be with you.” That was the most her reserved nature allowed her to express.”-Milan Kundera

17. “Oh lovers! be careful in those dangerous first days! once you’ve brought breakfast in bed you’ll have to bring it forever, unless you want to be accused of lovelessness and betrayal.”-Milan Kundera

18. “People are always shouting they want to create a better future. It’s not true. The future is an apathetic void of no interest to anyone. The past is full of life, eager to irritate us, provoke and insult us, tempt us to destroy or repaint it. The only reason people want to be masters of the future is to change the past.”-Milan Kundera

19. “There is no perfection only life”-Milan Kundera

21. “she loved to walk down the street with a book under her arm. It had the same significance for her as an elegant cane for the dandy a century ago. It differentiated her from others.”-Milan Kundera

22. “A single metaphor can give birth to love.”-Milan Kundera

23. “The brain appears to possess a special area which we might call poetic memory and which records everything that charms or touches us, that makes our lives beautiful … Love begins with a metaphor. Which is to say, love begins at the point when a woman enters her first word into our poetic memory.”-Milan Kundera

24. “And therein lies the whole of man’s plight. Human time does not turn in a circle; it runs ahead in a straight line. That is why man cannot be happy: happiness is the longing for repetition.”-Milan Kundera

25. “There is no means of testing which decision is better, because there is no basis for comparison. We live everything as it comes, without warning, like an actor going on cold. And what can life be worth if the first rehearsal for life is life itself? That is why life is always like a sketch.

No, “sketch” is not quite a word, because a sketch is an outline of something, the groundwork for a picture, whereas the sketch that is our life is a sketch for nothing, an outline with no picture.”-Milan Kundera

27. “We all need someone to look at us. we can be divided into four categories according to the kind of look we wish to live under. the first category longs for the look of an infinite number of anonymous eyes, in other words, for the look of the public.

The second category is made up of people who have a vital need to be looked at by many known eyes. they are the tireless hosts of cocktail parties and dinners. they are happier than the people in the first category, who, when they lose their public, have the feeling that the lights have gone out in the room of their lives. this happens to nearly all of them sooner or later. people in the second category.

On the other hand, can always come up with the eyes they need. then there is the third category, the category of people who need to be constantly before the eyes of the person they love. their situation is as dangerous as the situation of people in the first category. one day the eyes of their beloved will close, and the room will go dark. and finally there is the fourth category, the rarest, the category of people who live in the imaginary eyes of those who are not present. they are the dreamers.”-Milan Kundera

28. “The only relationship that can make both partners happy is one in which sentimentality has no place and neither partner makes any claim on the life and freedom of the other.”-Milan Kundera

29. “loves are like empires: when the idea they are founded on crumbles, they, too, fade away.”-Milan Kundera

30. “And what can life be worth if the first rehearsal for life is life itself?”-Milan Kundera

Finding The Ignition: 6 Ways To Turn A Guy On

52 Cute Love Quotes From The Heart

52 Cute Love Quotes From The Heart