70 Inspiring Quotes From Fictional Characters Guaranteed To Motivate You

Characters in fiction have always enthralled us. Sometimes they utter some dialogues that eventually become truly inspiring and moving witty quotes.

“If you’re good at something, never do it for free,” is one of many famous quotes made by Joker from The Dark Knight, and who can forget such witty retort.

So, not all wisdom nuggets come from philosophers, novelists, poets, saint and prophets. We’re lifted up by the incredibly inspiring words of some of our favorite fictional characters.

Check out these quotes from fictional characters!

1. “The Only Sensible Way To Live In This World Is Without Rules. And Tonight, You’re Gonna Break Your One Rule.”― The Joker 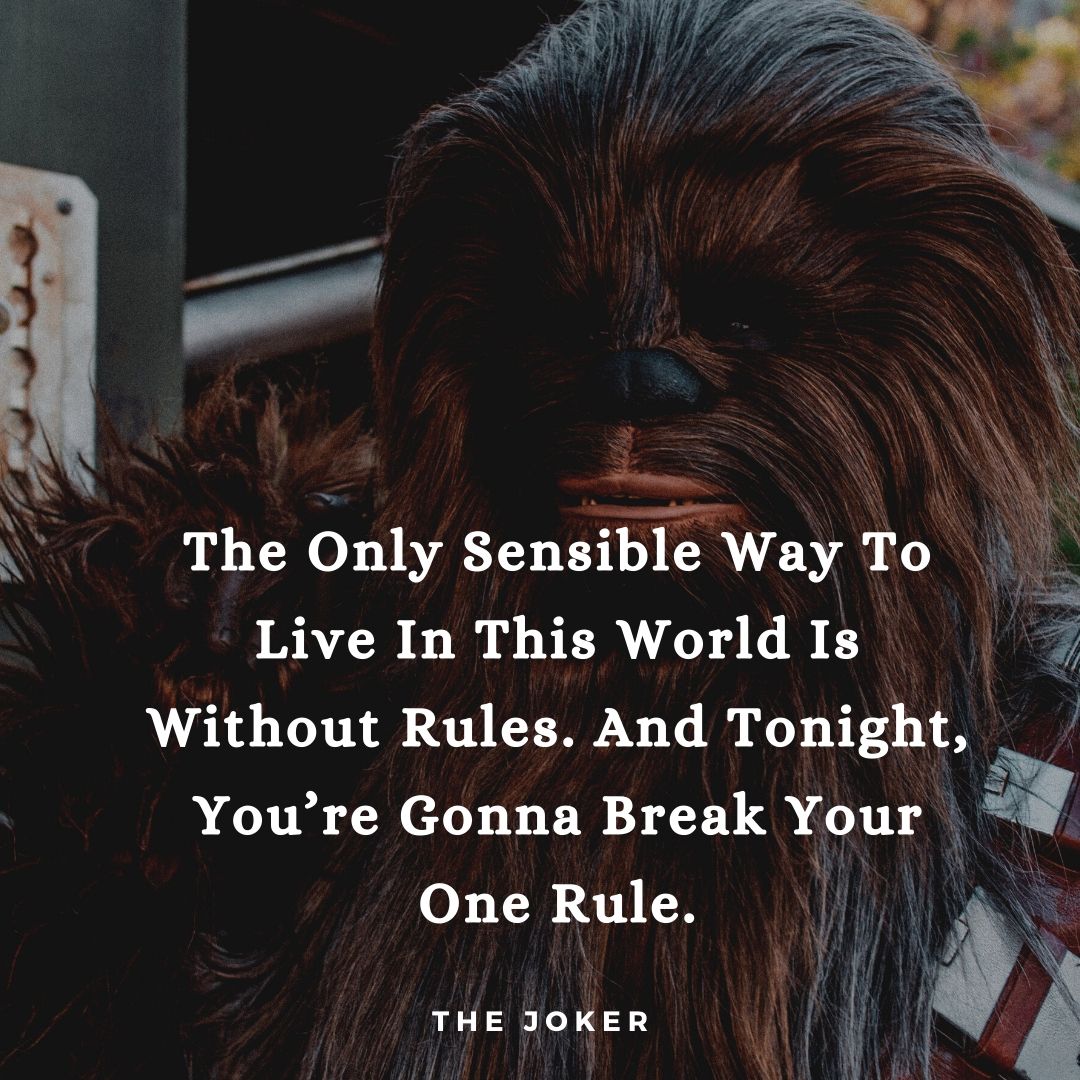 2. “Confidence…It’s The Food Of The Wise Man, But The Liquor Of The Fool.”—Vikram, The Office

3. “I Don’t Know How Many Years I Got Left On This Earth, So I’m Gonna Get Real Weird With It.”—Frank Reynolds, It’s Always Sunny In Philadelphia

4. “One Day, You’re Gonna Look Around And You’re Going To Realize That Everybody Loves You, But Nobody Likes You. And That Is The Loneliest Feeling In The World.”—BoJack Horseman, BoJack Horseman

5. “It Is Important To Draw Wisdom From Different Places. If You Take It From Only One Place, It Becomes Rigid And Stale.”—Uncle Iroh, Avatar: The Last Airbender 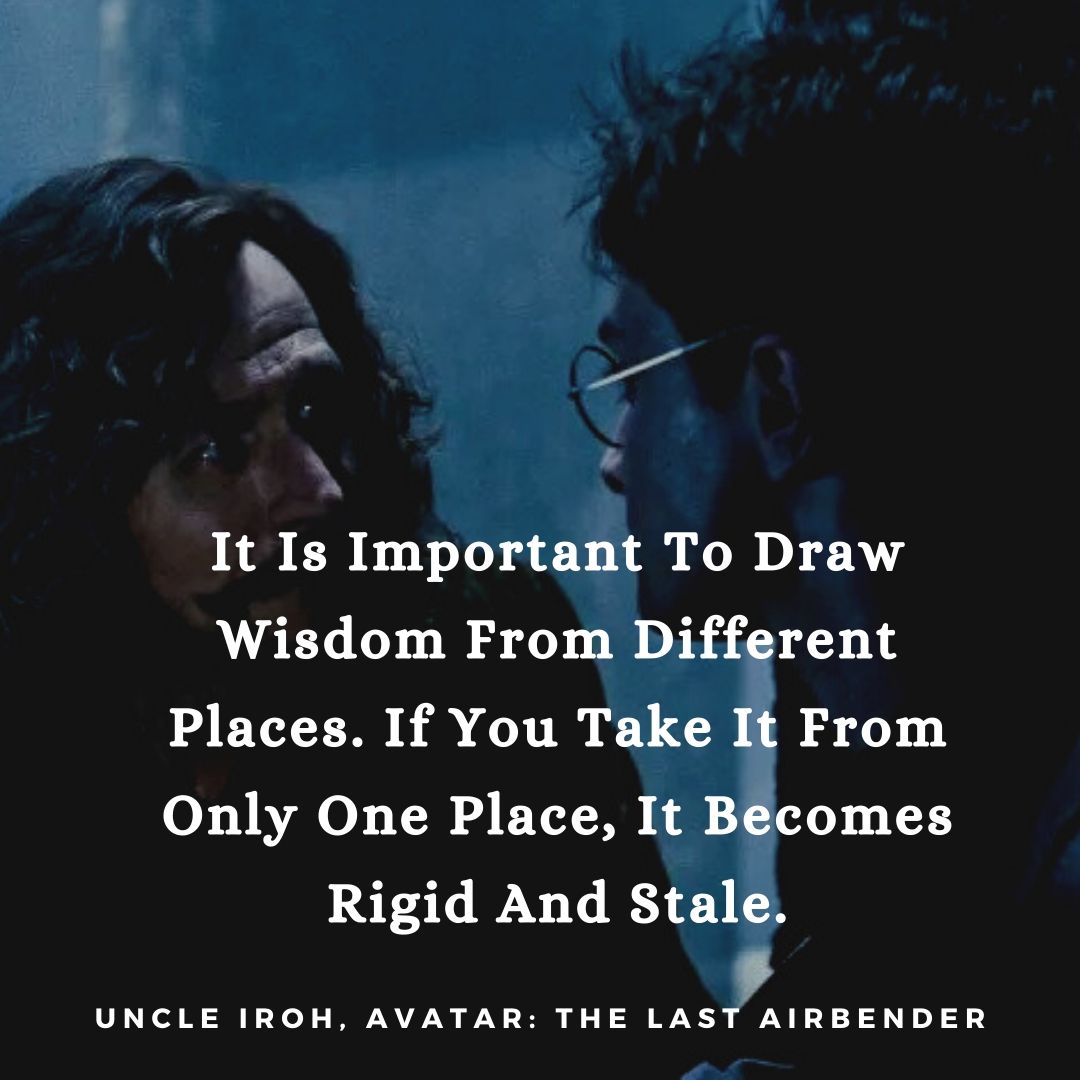 6. “It Does Not Do Well To Dwell On Dreams And Forget To Live.”—Albus Dumbledore, Harry Potter And The Sorcerer’s Stone

7. “Introduce A Little Anarchy. Upset The Established Order, And Everything Becomes Chaos. I’m An Agent Of Chaos.”― The Joker

8. “It Gets Easier. Every Day It Gets A Little Easier. But You Gotta Do It Every Day  —  That’s The Hard Part. But It Does Get Easier.”—Jogging Baboon, BoJack Horseman

9. “Sucking At Something Is The First Step At Being Sorta Good At Something.”—Jake The Dog, Adventure Time

10. “Losing People Is A Part Of Life, But That Doesn’t Mean You Stop Letting Them In.”—Batman, The Lego Movie 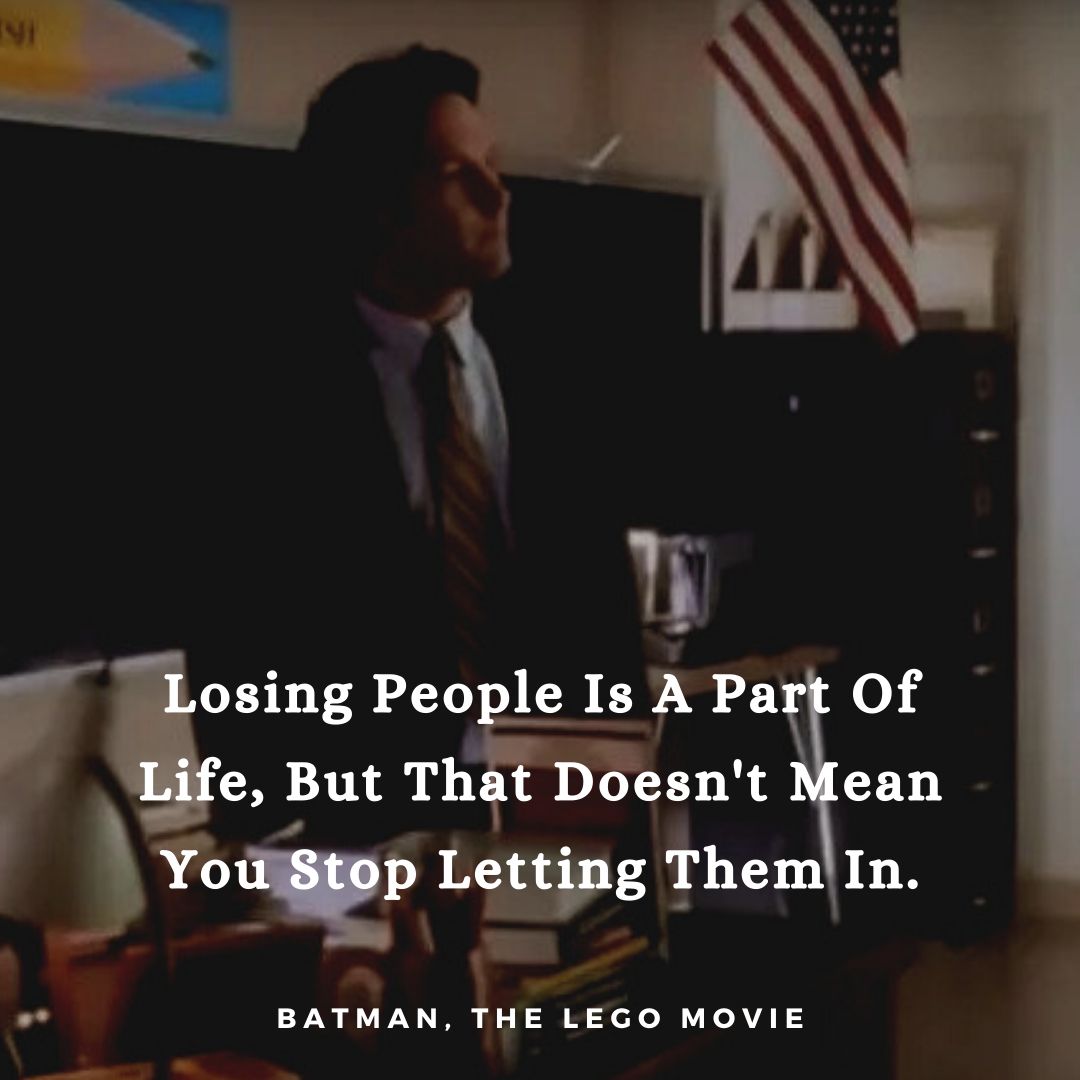 11. “When You Do Things Right, People Won’t Be Sure You’ve Done Anything At All.”—God, Futurama

13. “An Old Friend Once Told Me Something That Gave Me Great Comfort — Something He Had Read. He Said That Mozart, Beethoven, And Chopin Never Died. They Simply Became Music.”—Dr. Robert Ford, Westworld

14.”Many That Live Deserve Death. And Some That Die Deserve Life. Can You Give It To Them? Then Do Not Be Too Eager To Deal Out Death In Judgement.”—Gandalf, The Lord Of The Rings 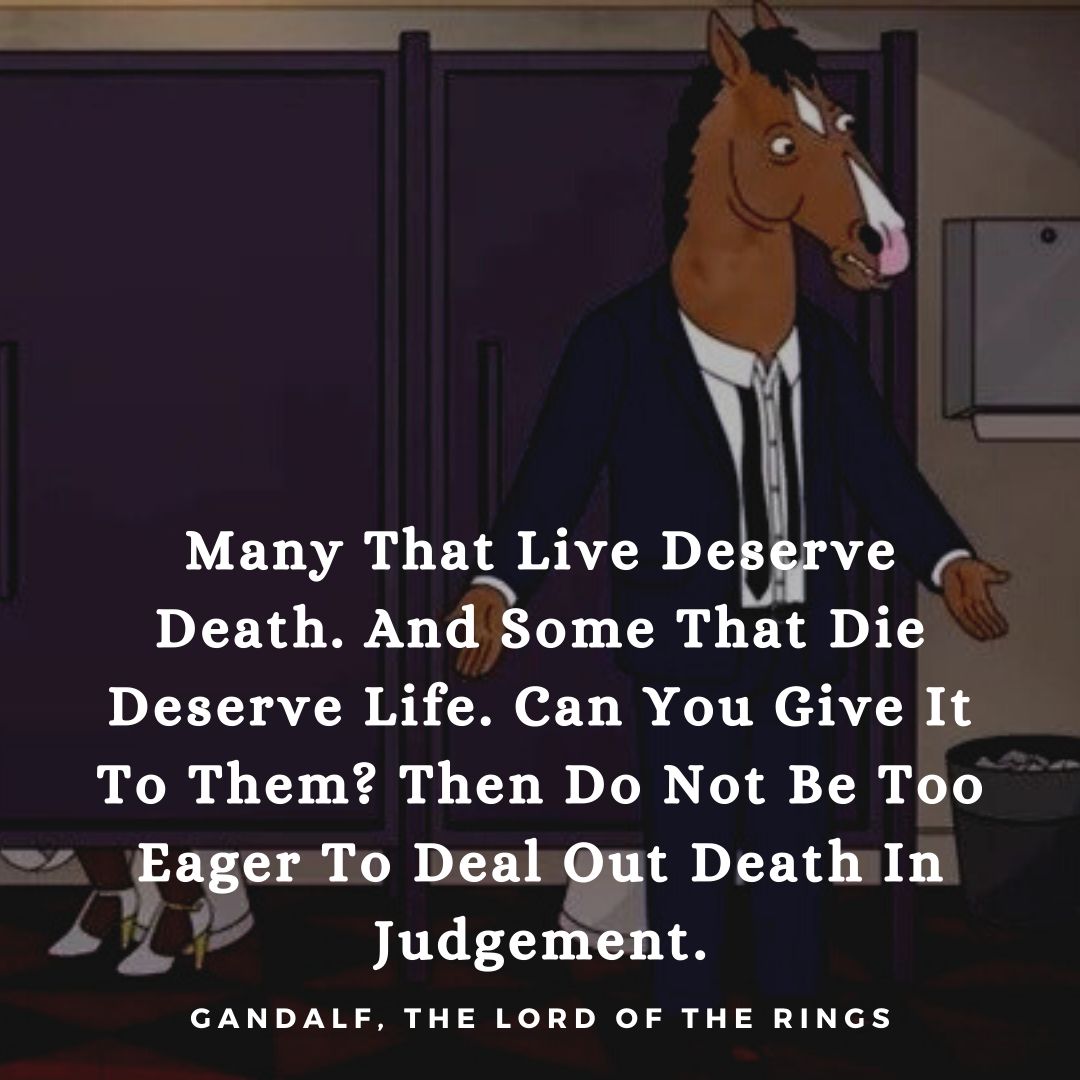 16. “Pride Is Not The Opposite Of Shame, But Its Source. True Humility Is The Only Antidote To Shame.”—Vikram, The Office

17. “We Accept The Love We Think We Deserve.”—Bill Anderson, The Perks Of Being A Wallflower

18. “Some People Will Always Need Help. That Doesn’t Mean They’re Not Worth Helping.”—Meera Reed, Game Of Thrones 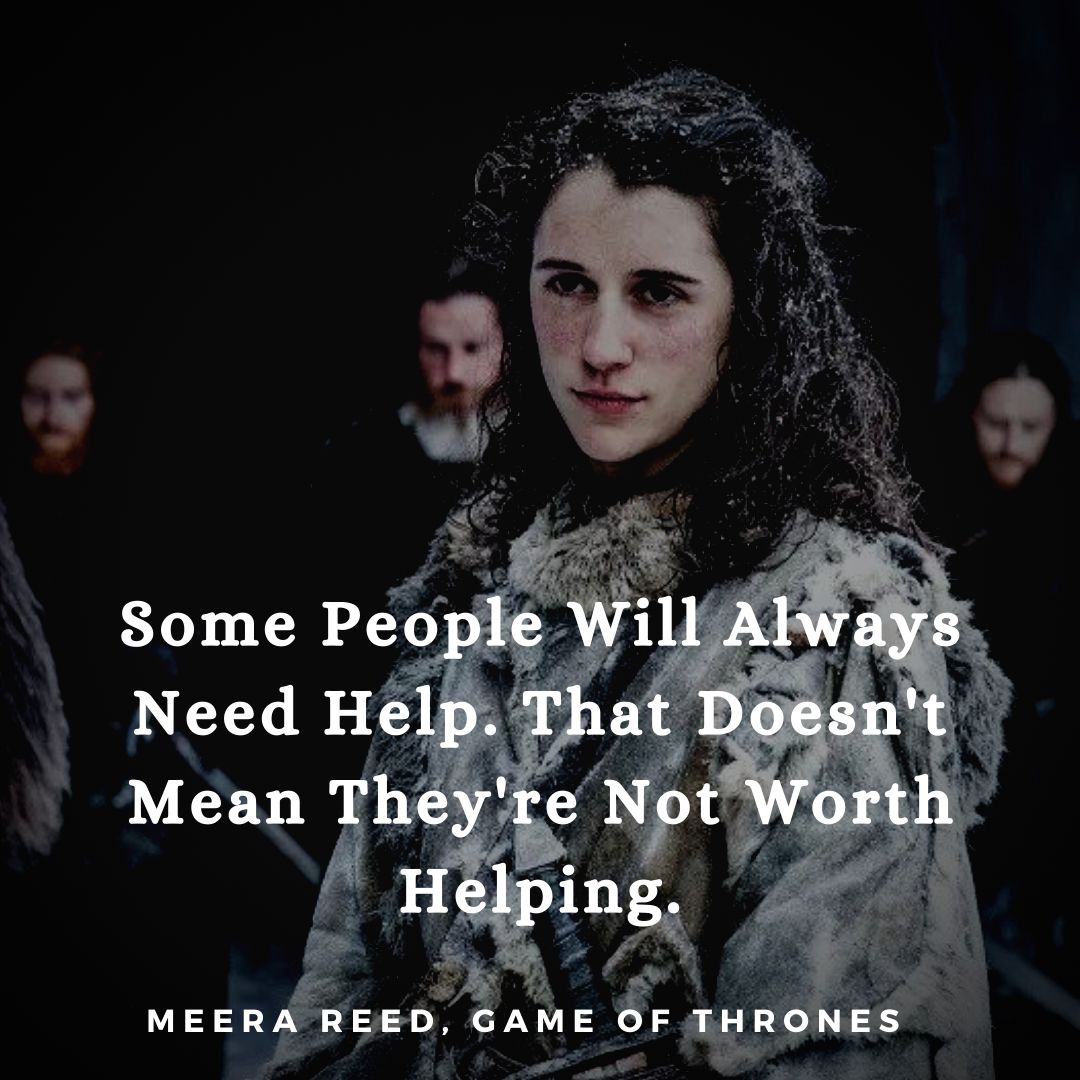 19. “We Stopped Checking For Monsters Under Our Bed, When We Realized They Were Inside Us.”― The Joker

20. “If You Want To Know What A Man’s Like, Take A Good Look At How He Treats His Inferiors, Not His Equals.”—Sirius Black, Harry Potter And The Goblet Of Fire

21. “I Wish There Was A Way To Know You’re In The Good Old Days Before You’ve Actually Left Them.”—Andy Bernard, The Office

22. “This Is My Family. I Found It All On My Own. It’s A Little Broken But Still Good.”—Stitch, Lilo And Stitch

23. “Oh Yes, The Past Can Hurt, But The Way I See It, You Can Either Run From It Or Learn From It.”—Rafiki, The Lion King 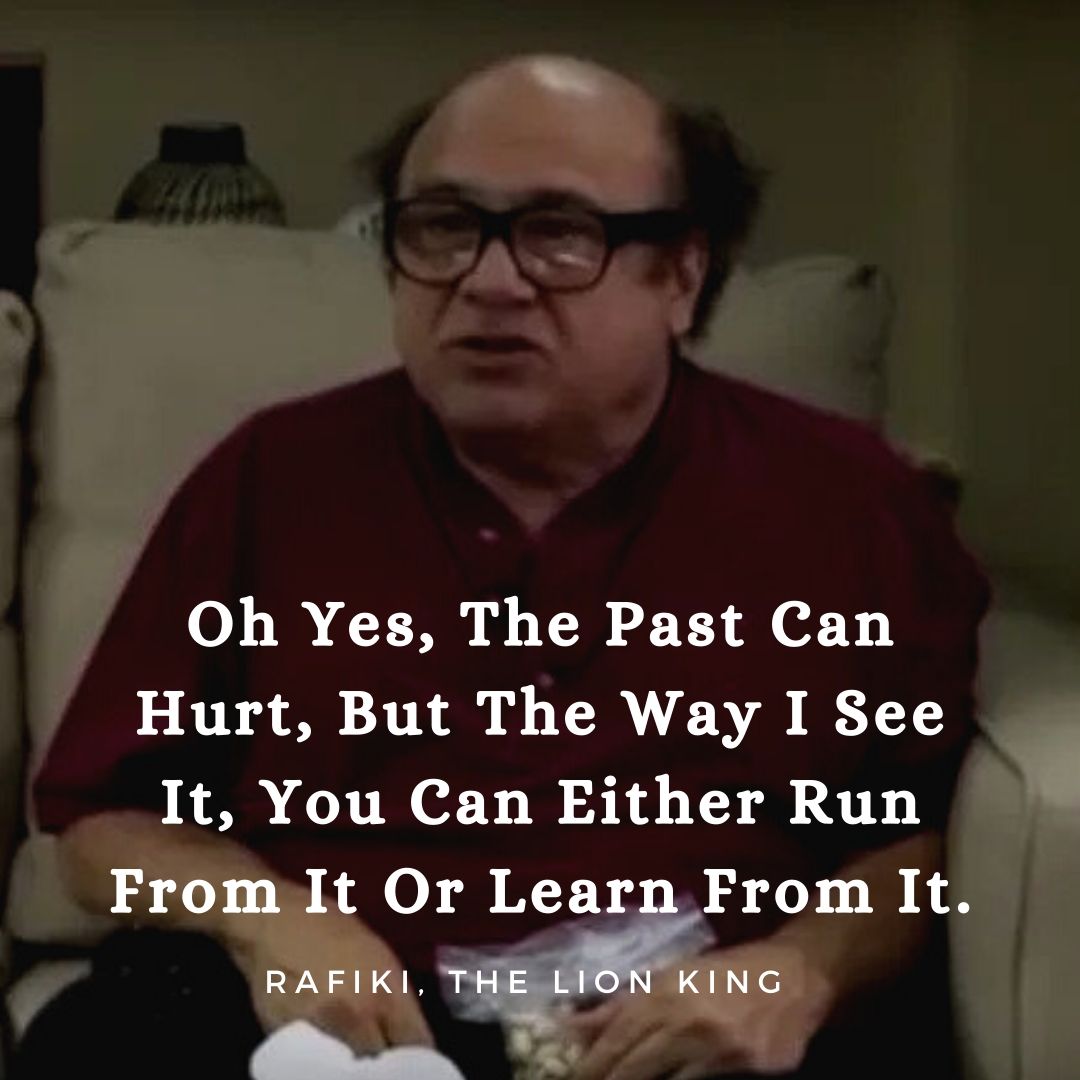 24. “A Person Is Smart. People Are Dumb, Panicky, Dangerous Animals, And You Know It.”—Agent K, Men In Black

26.”The Real Joke Is Your Stubborn, Bone Deep Conviction That Somehow, Somewhere, All Of This Makes Sense! That’s What Cracks Me Up Each Time!”― The Joker

27. “I Wish There Was A Way To Know You’re In The Good Old Days, Before You’ve Actually Left Them.”—Andy Bernard, The Office 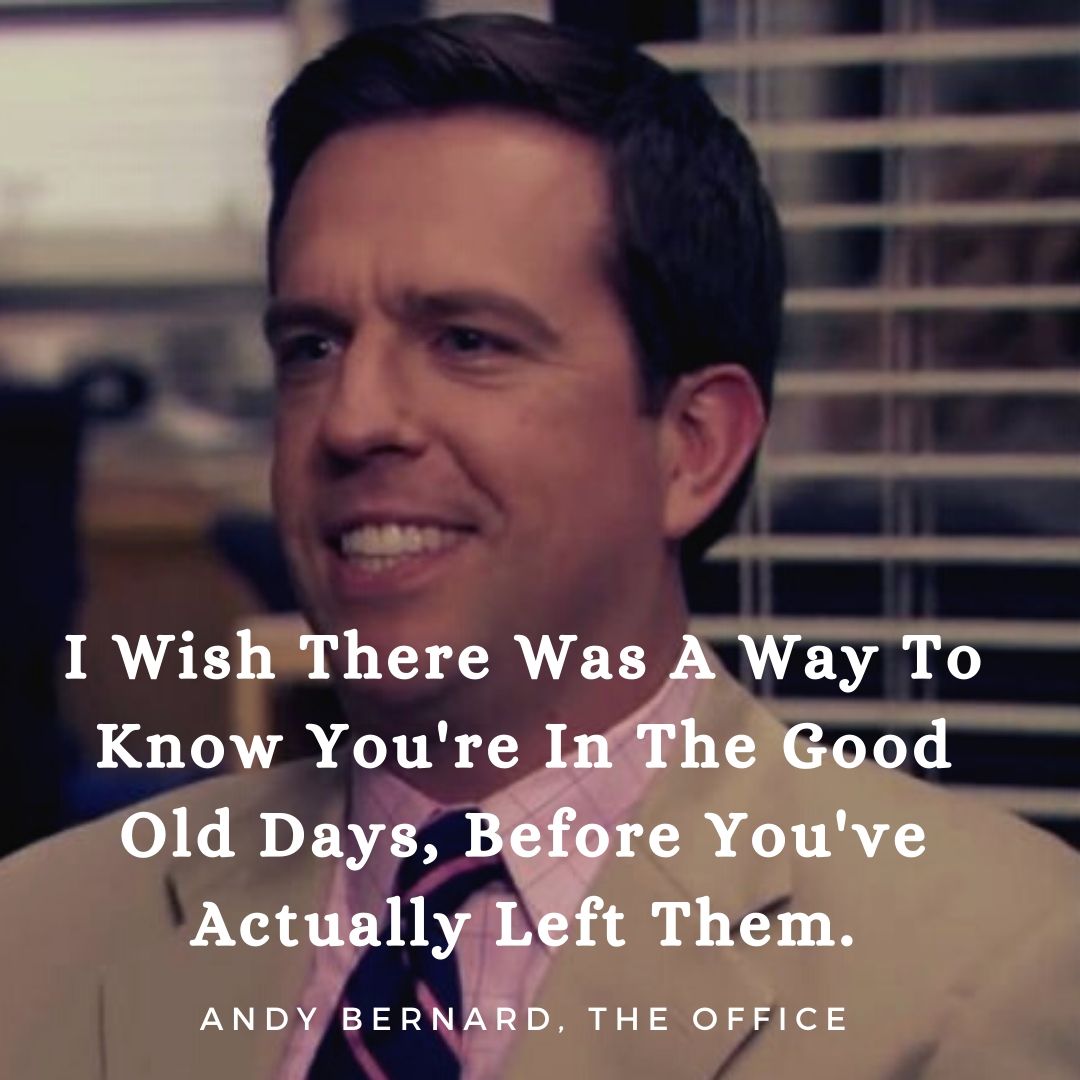 29. “Sucking At Something Is The First Step To Being Kinda Good At Something.”—Jake The Dog, Adventure Time

30. “Everyone Dies. Not Everyone Really Lives.”—William Wallace, Braveheart

32. “Growing Old Is Mandatory; Growing Up Is Optional”—The Doctor, Doctor Who

33. “Whenever I’m About Do Something, I Think, ‘would An Idiot Do That?’ And If They Would, I Do Not Do That Thing.”—Dwight Schrute, The Office

34. “People Like Being Lied To. They Don’t Like Finding Out They’ve Been Lied To.”—Dr. Gregory House, House 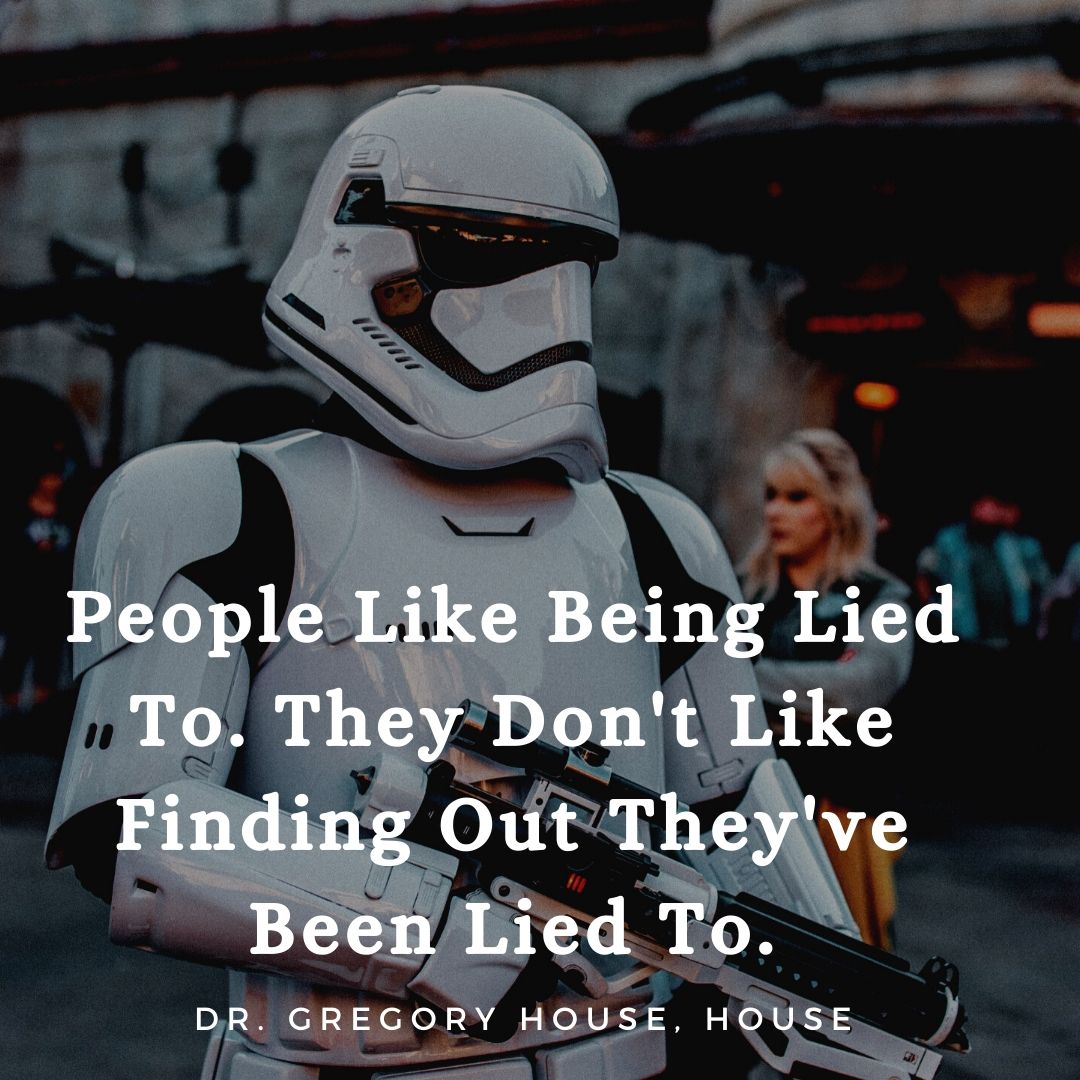 36. I am no longer going to become a fictional character to please people. That’s too much work. — Lauryn Hill

37. The world is full of fictional characters looking for their stories — Diane Arbus

38. Crime fiction makes money. It may be harder for writers to get published, but crime is doing better than most of what we like to call CanLit. It’s elementary, plot-driven, character-rich story-telling at its best. — Linwood Barclay

39. I’ve been getting a lot of science fiction scripts which contained variations on my ‘Star Trek’ character and I’ve been turning them down. I strongly feel that the next role I do, I should not be wearing spandex. — Marina Sirtis

40. There are relatively few science fiction or fantasy books with the main character being an old person. — Elizabeth Moon

41. When someone disrespects you, beware the impulse to win their respect. For disrespect is not a valuation of your worth but a signal of their character. — Brendon Burchard

42. They do not have free will, they do not exercise volition. They are easily born, and as easily killed off. — John Banville

43. Writers are magpies, and we collect details about people and we use them for fictional characters. — Caroline Leavitt

44. Gayness is built into Batman. I’m not using gay in the pejorative sense, but Batman is very, very gay. There’s just no denying it. Obviously as a fictional character he’s intended to be heterosexual, but the basis of the whole concept is utterly gay. — Sayings

45. Accept both compliments and criticism. It takes both sun and rain for a flower to grow. — Sayings

46. Reading fiction not only develops our imagination and creativity, it gives us the skills to be alone. It gives us the ability to feel empathy for people we’ve never met, living lives we couldn’t possibly experience for ourselves, because the book puts us inside the character’s skin. — Ann Patchett

47. If you can tell stories, create characters, devise incidents, and have sincerity and passion, it doesn’t matter a damn how you write. — W. Somerset Maugham

48. A mistake that makes you humble is better than an achievement that makes you arrogant. — Sayings
Make it your strength. Then it can never be your weakness. Armour yourself in it, and it will never be used to hurt you. — George R. R. Martin

49. If you will practice being fictional for a while, you will understand that fictional characters are sometimes more real than people with bodies and heartbeats. — Richard Bach

50. This is a work of fiction. All the characters in it, human and otherwise, are imaginary, excepting only certain of the fairy folk, whom it might be unwise to offend by casting doubts on their existence. Or lack thereof. — Neil Gaiman

51. To be yourself in a world that in constantly trying to make you something else is the greatest accomplishment. — Ralph Waldo Emerson

63. Just because you are a character doesn’t mean you have character. — Quentin Tarantino

54. The world is a stage we walk upon. We are all in a way fictional characters who write ourselves with our beliefs. — Louis Theroux

55. The God of the Old testament is arguably the most unpleasant character in all fiction. — Richard Dawkins

56. Remind yourself that you cannot fail at being yourself. — Wayne Dyer

57. Roland Deschain from Stephen King’s Dark Tower series. There’s a whole world about Roland left to know. I’ve got questions. He’d have answers. So pour him a glass of wine. — Megan Chance

58. Let yourself be drawn by the strange pull of what you love. It will not lead you astray. — Rumi

59. I see now that the circumstances of ones birth are irrelevent. It is what you do with the gift of life that determines who you are — Suzanne Collins

60. I wanted to go underneath it and make a more modest character study movie. — Quentin Tarantino

61. As far as I am concerned, Don Quixote is the most metal fictional character that I know. Single handed, he is trying to change the world, regardless of any personal consequences. — Christopher Lee

62. Nobody is superior, nobody is inferior, but nobody is equal either. People are simply unique, uncomparable. You are You, I am I. — Osho

63. Intensely moving but never sentimental, Academy Street is a profound meditation on what Faulkner called ‘the human heart in conflict with itself’. In Tess Lohan, Mary Costello has created one of the most fully realized

64. characters in contemporary fiction. What a marvel of a book. — Ron Rash

65. You should grieve if a fictional character is killed. You should care. — George R. R. Martin

66. It can’t be healthy to develop relationships with people who don’t exist. — Chris Colfer

68. In my work, it’s the current that connects me and my actual pulse to a fictional character in a made up story, it allows me to feel, pretend feelings and sorrows and imagined pain. — Meryl Streep

69. You can have a very intense relationship with fictional characters because they are in your own head. — J. K. Rowling

70. When you play a non-fiction character it is more responsibility than when you are playing a fiction character because that person lived, and you do want to pay respect to that. — Bryan Cranston