Why Good Management Can Lead To Failure?

He further adds, “Occasionally, however, disruptive technologies emerge: innovations that result in worse product performance, at least in the near-term…Disrutpive technologies  bring to a market a very different values proposition than had been available previously.Generally, disruptive technologies underperform established  products  in mainstream markets.But they have other features  that a few fringe (and generally new) customers value. Products based on disruptive technologies are typically cheaper, simpler, smaller, and, frequently, more  convenient to use.” Christensen reflects it through the following graph: 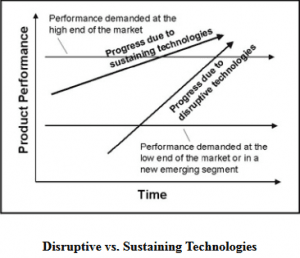 The above graph reflects how disruptive technologies cause problems because they do not initially satisfy the demands of even the high end of the market.

“The Innovator’s Dilemma”: Insightful Inputs -I

Blame It on Clayton Christensen, Steve Blank and Eric Ries, If I Ever Fail

Blame It on Clayton Christensen, Steve Blank and Eric Ries, If I Ever Fail