1. War is never a lasting solution for any problem. 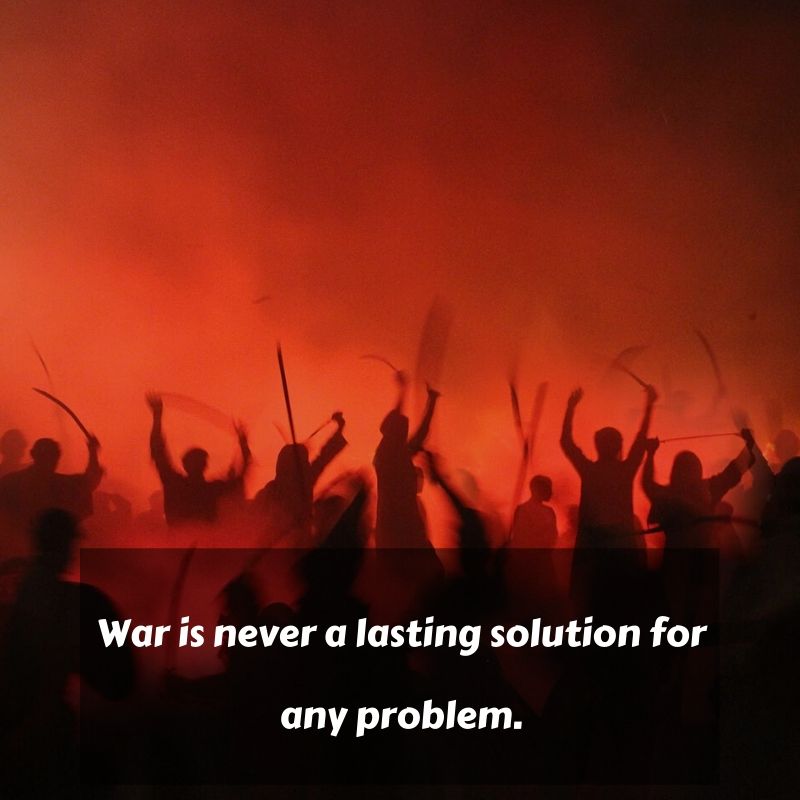 2. Only the dead have seen the end of war. 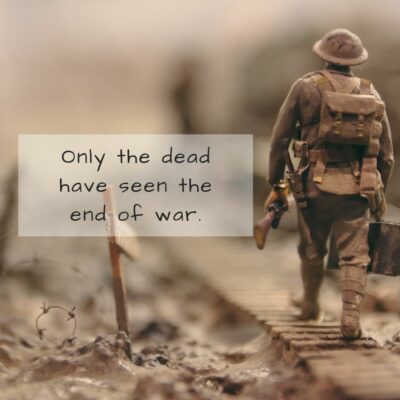 3. Older men declare war. But it is youth that must fight and die. 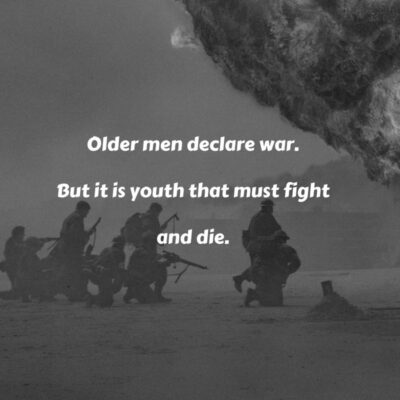 4. All war is a symptom of man’s failure as a thinking animal. 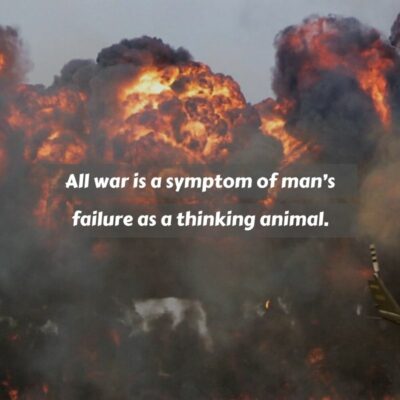 5. Men make war to get attention. All killing is an expression of self-hate. 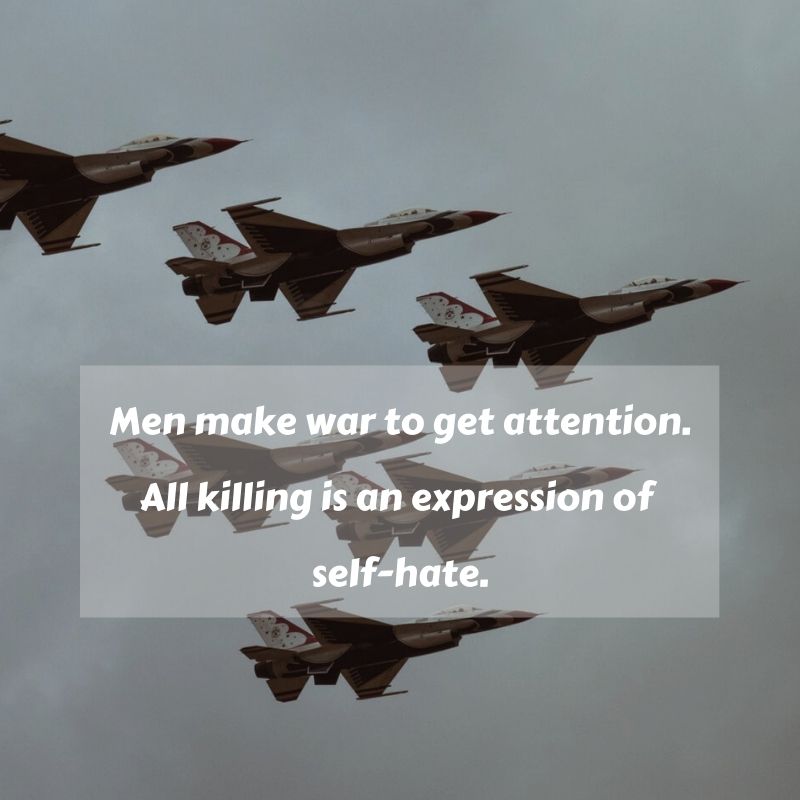 6. It doesn’t make a damned bit of difference who wins the war to someone who’s dead. 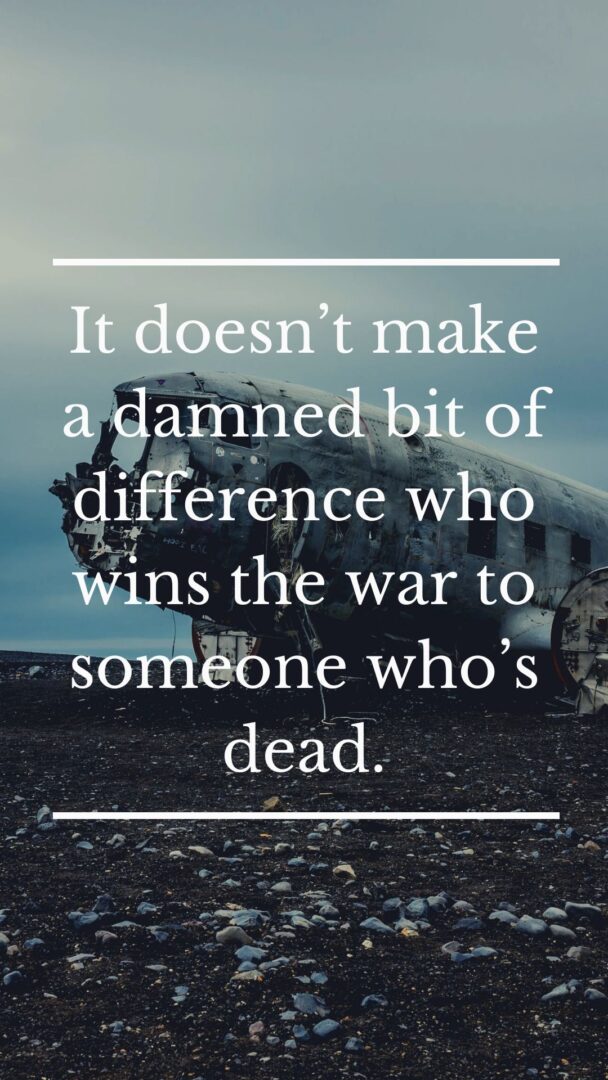 7. It’s not the armies that are evil, it’s wars and people who start them. 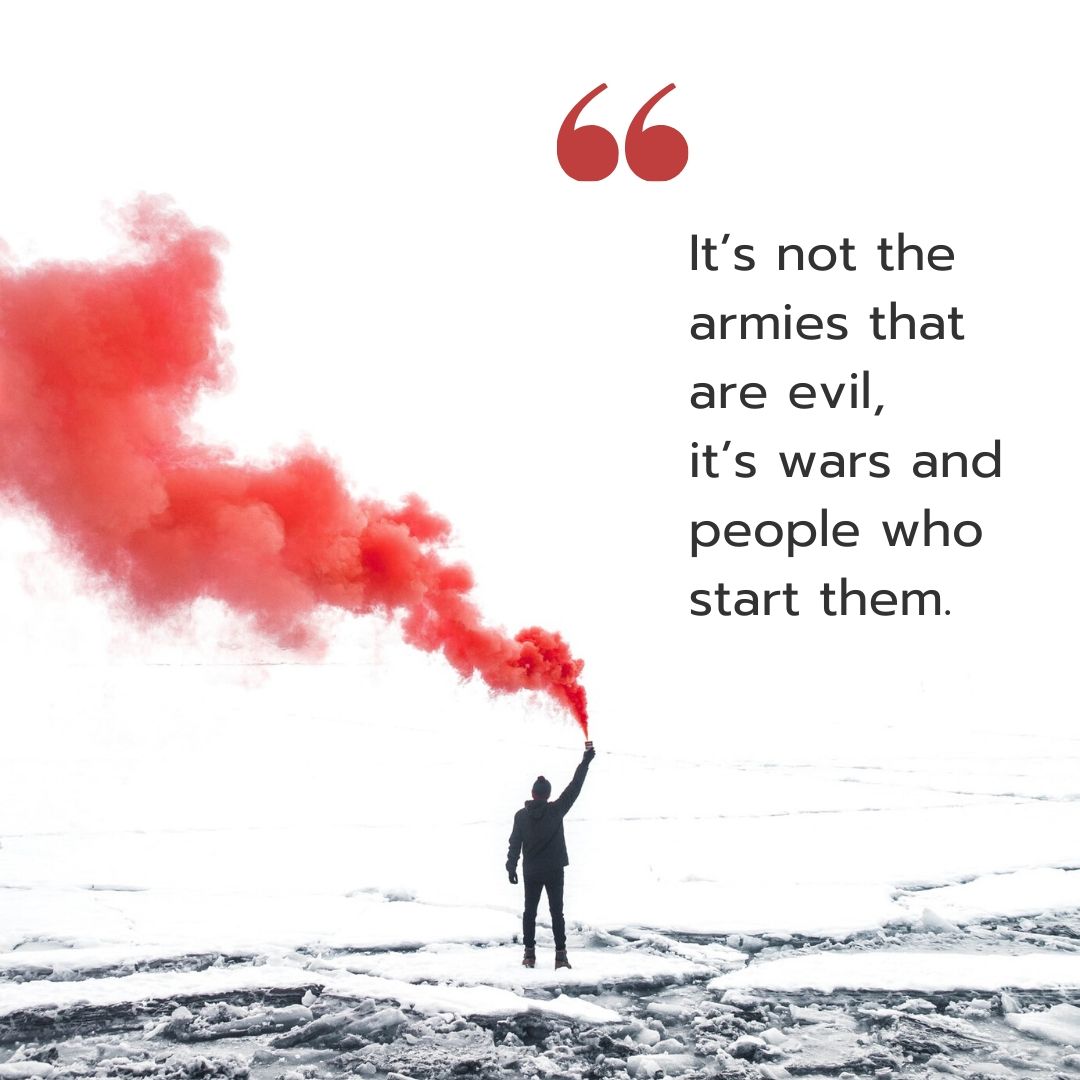 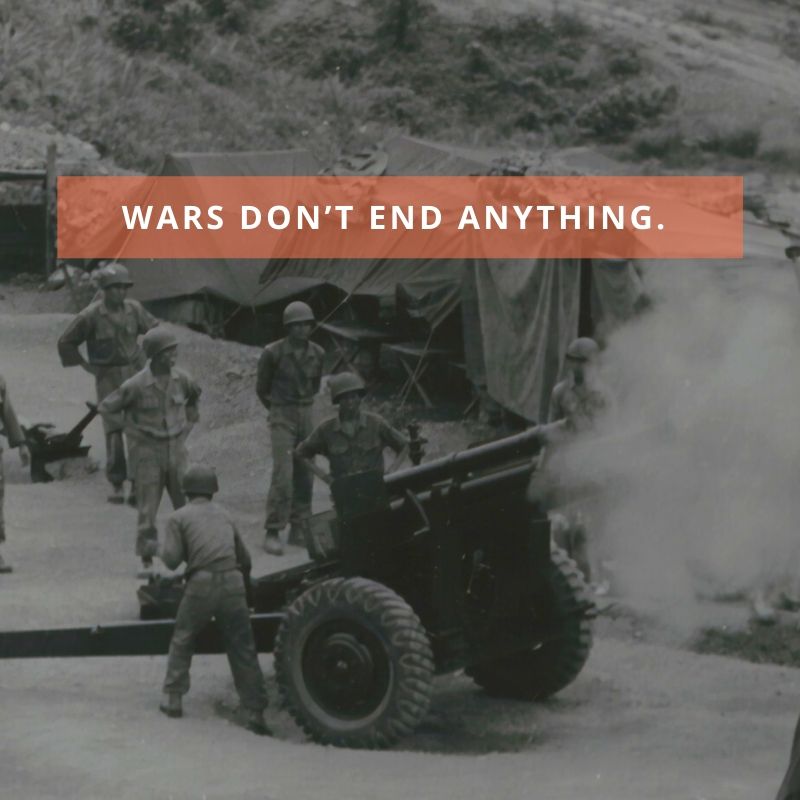 9. War is a game that can be played with a smile on a face, but there won’t be any laughter in a heart. 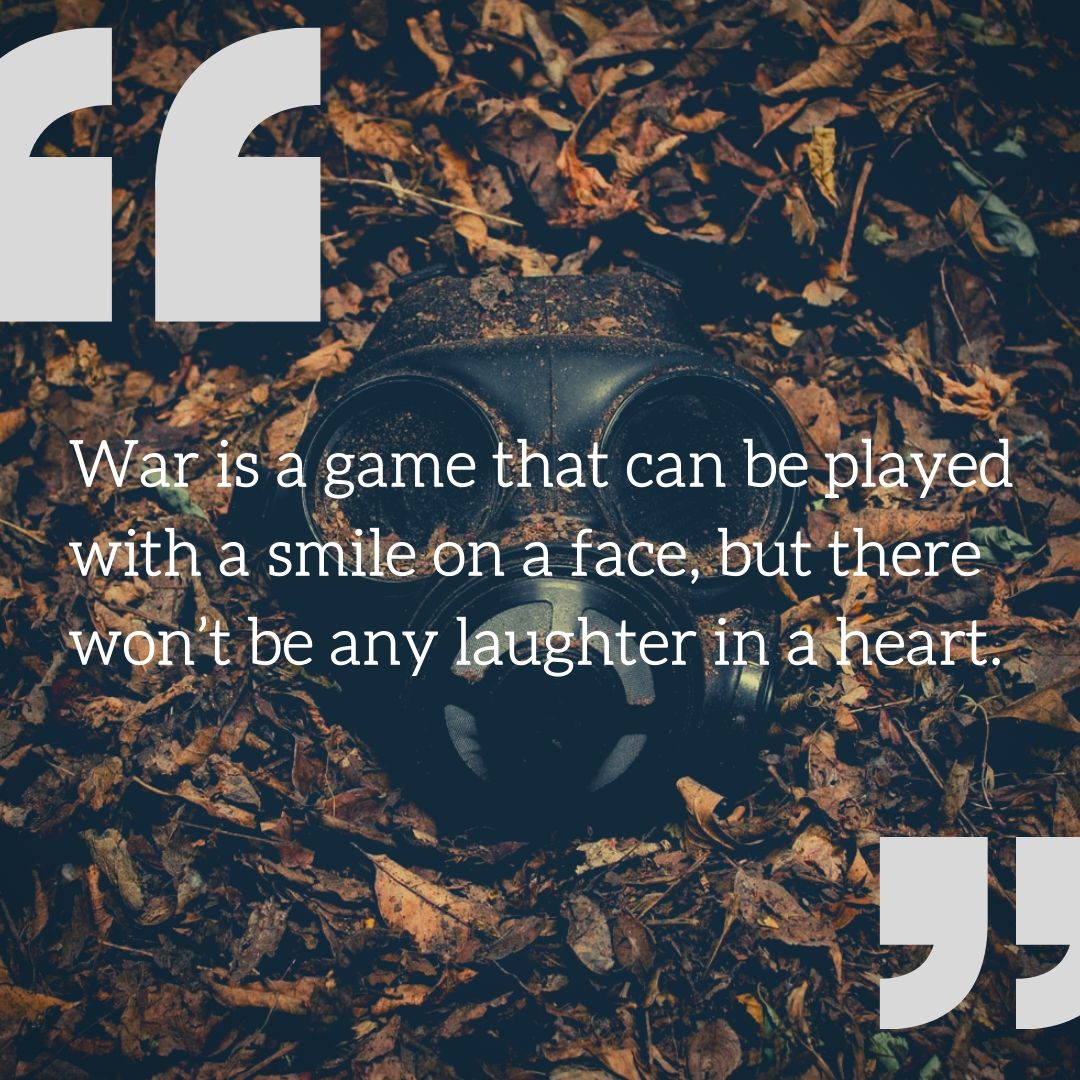 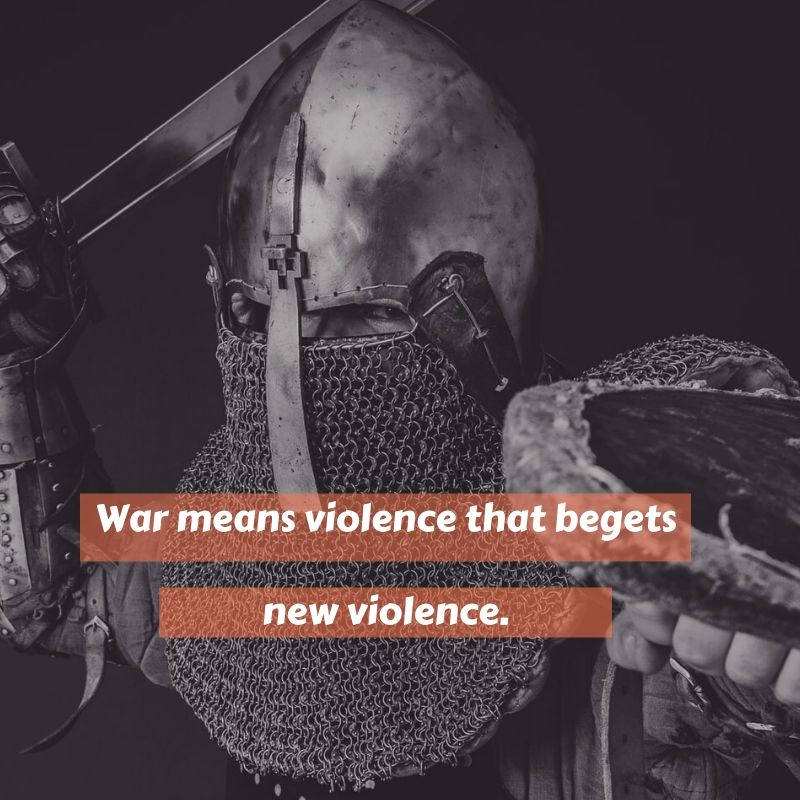 11. It’s funny how those who are most pro-war are almost always the guys who never had to fight in one. 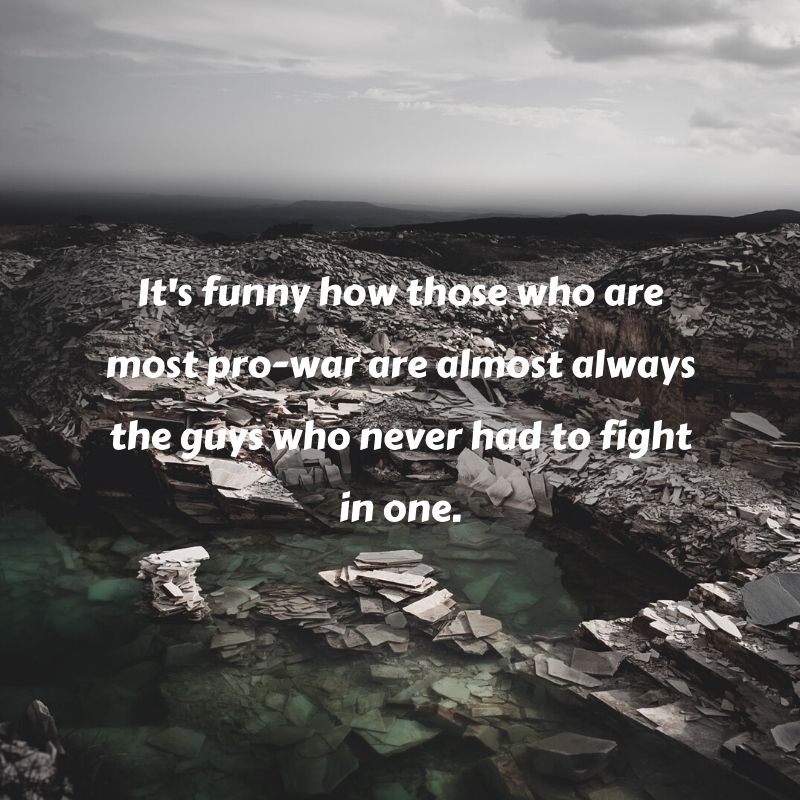 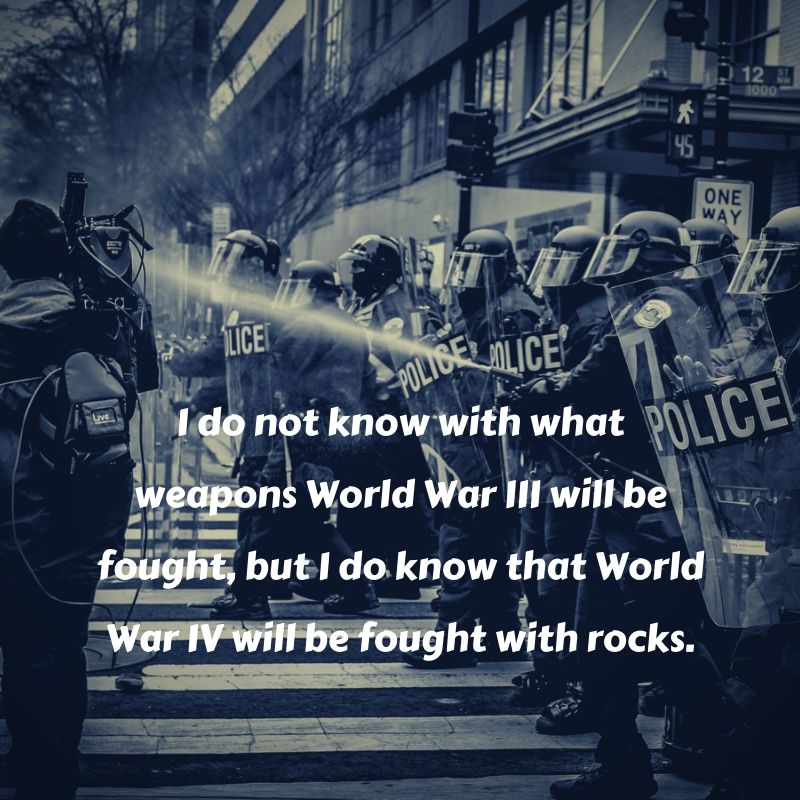 13. War may sometimes be a necessary evil. But no matter how necessary, it is always an evil, never a good. We will not learn how to live together in peace by killing each other’s children. 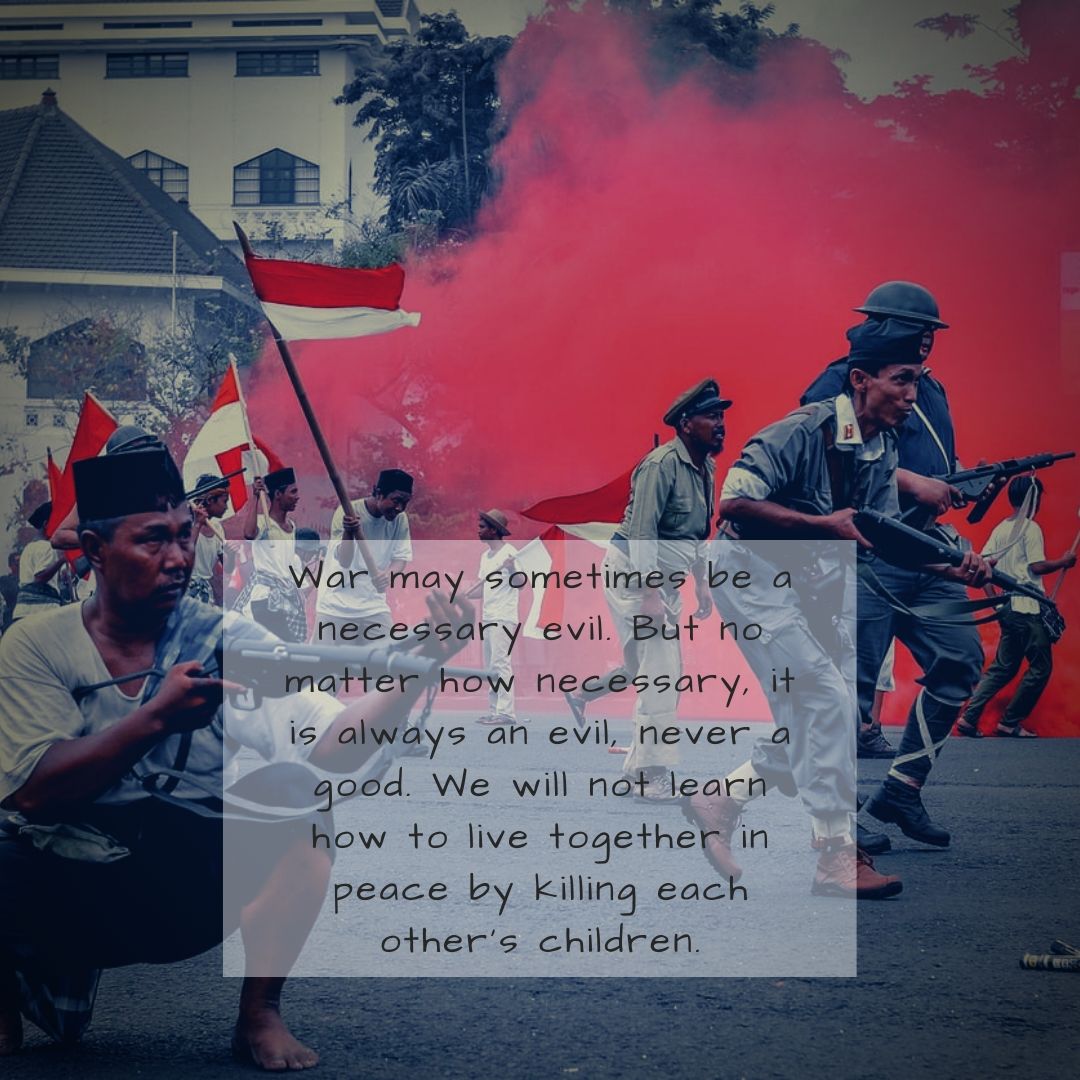 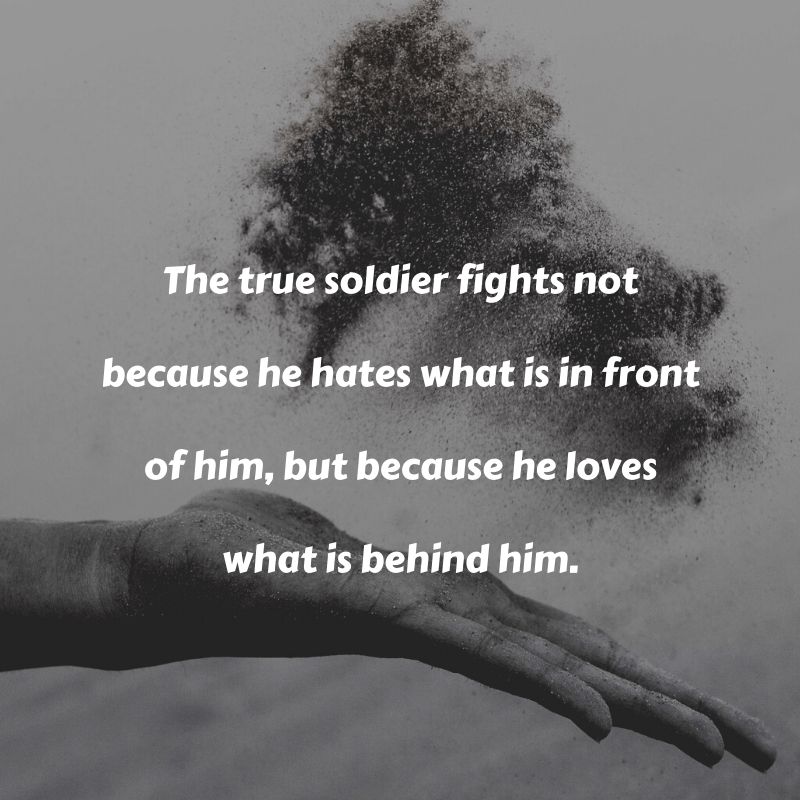 15. War is only a cowardly escape from the problems of peace. 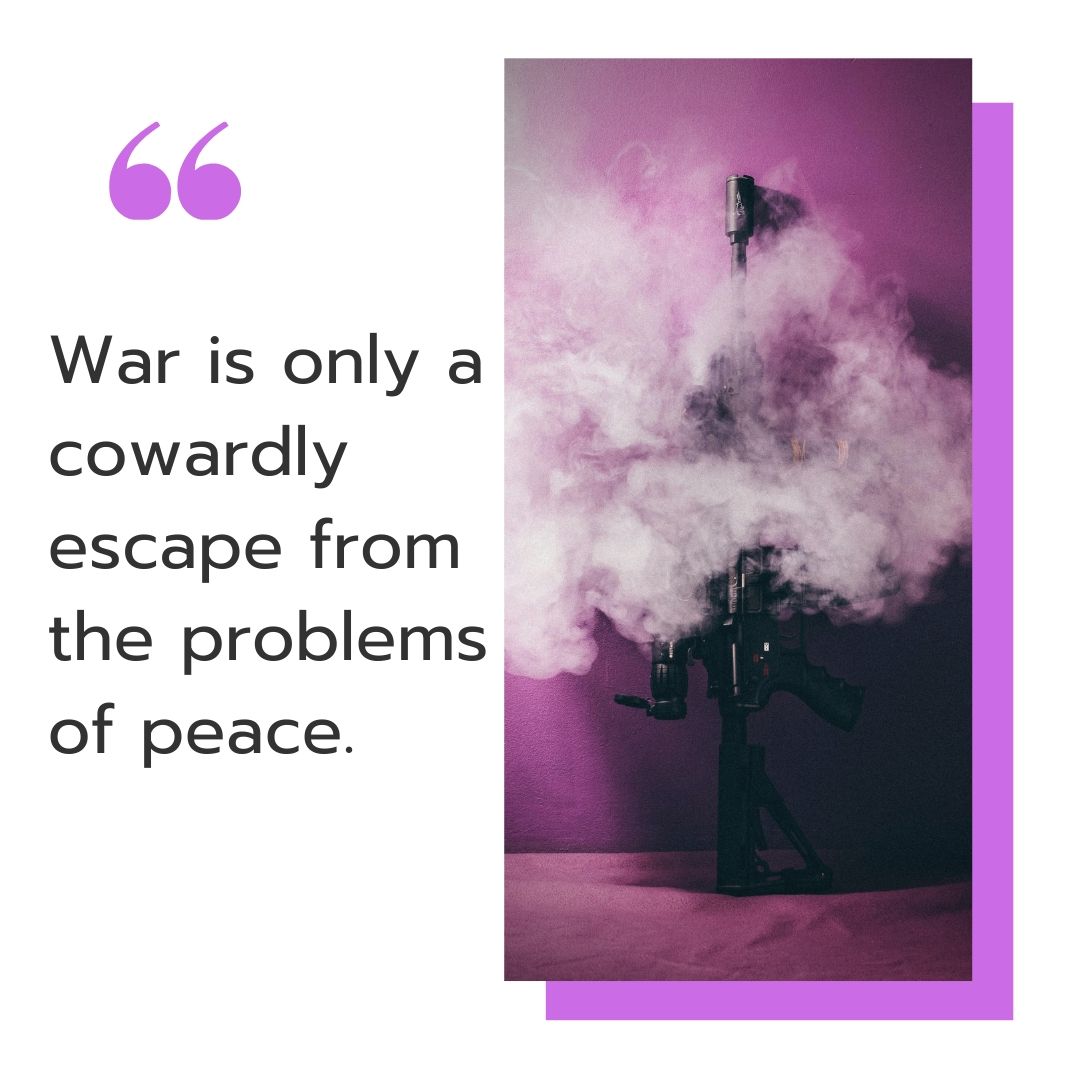 16. Wars of pen and ink often lead to wars of cannon and bayonets. 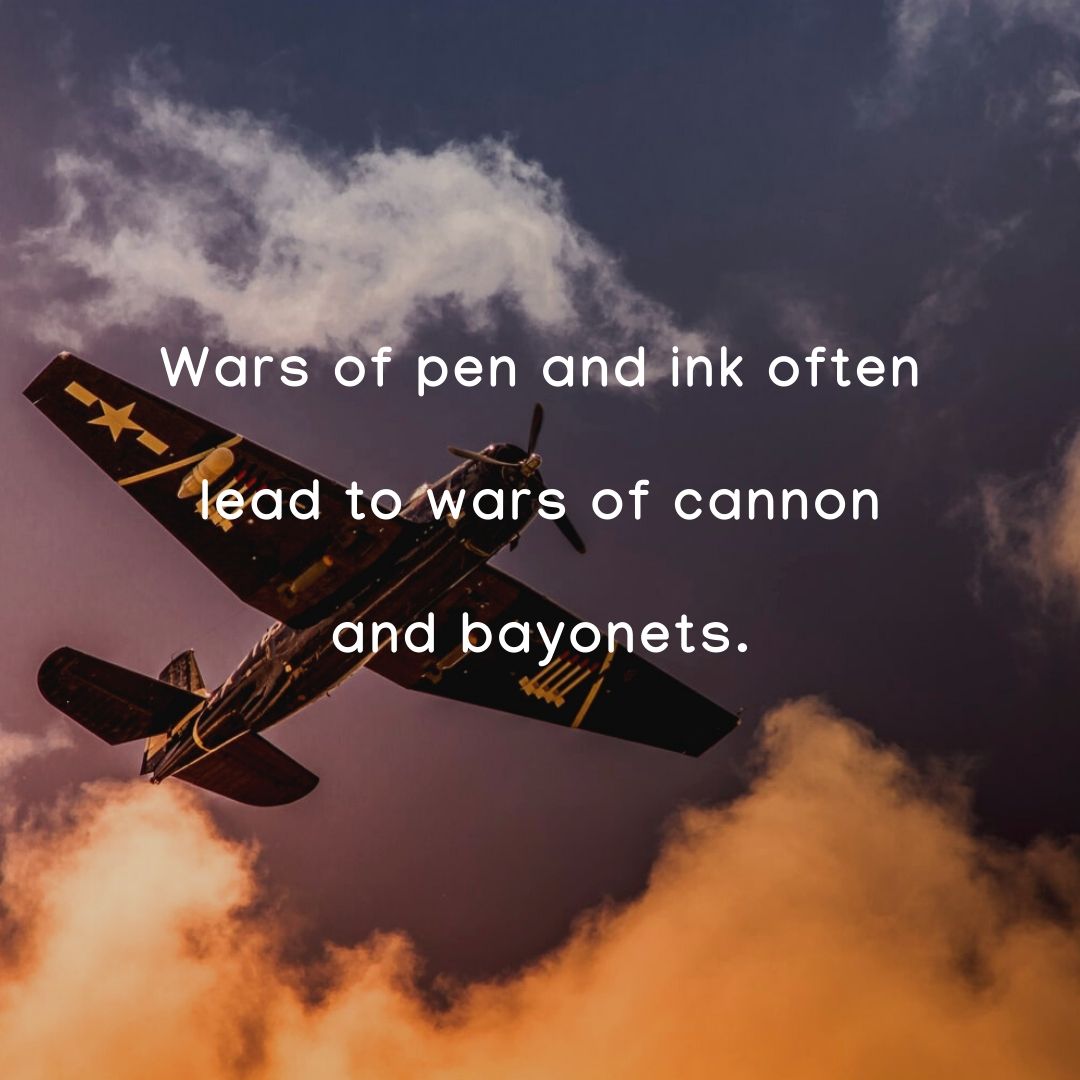 17. History teaches that wars begin when governments believe the price of aggression is cheap. 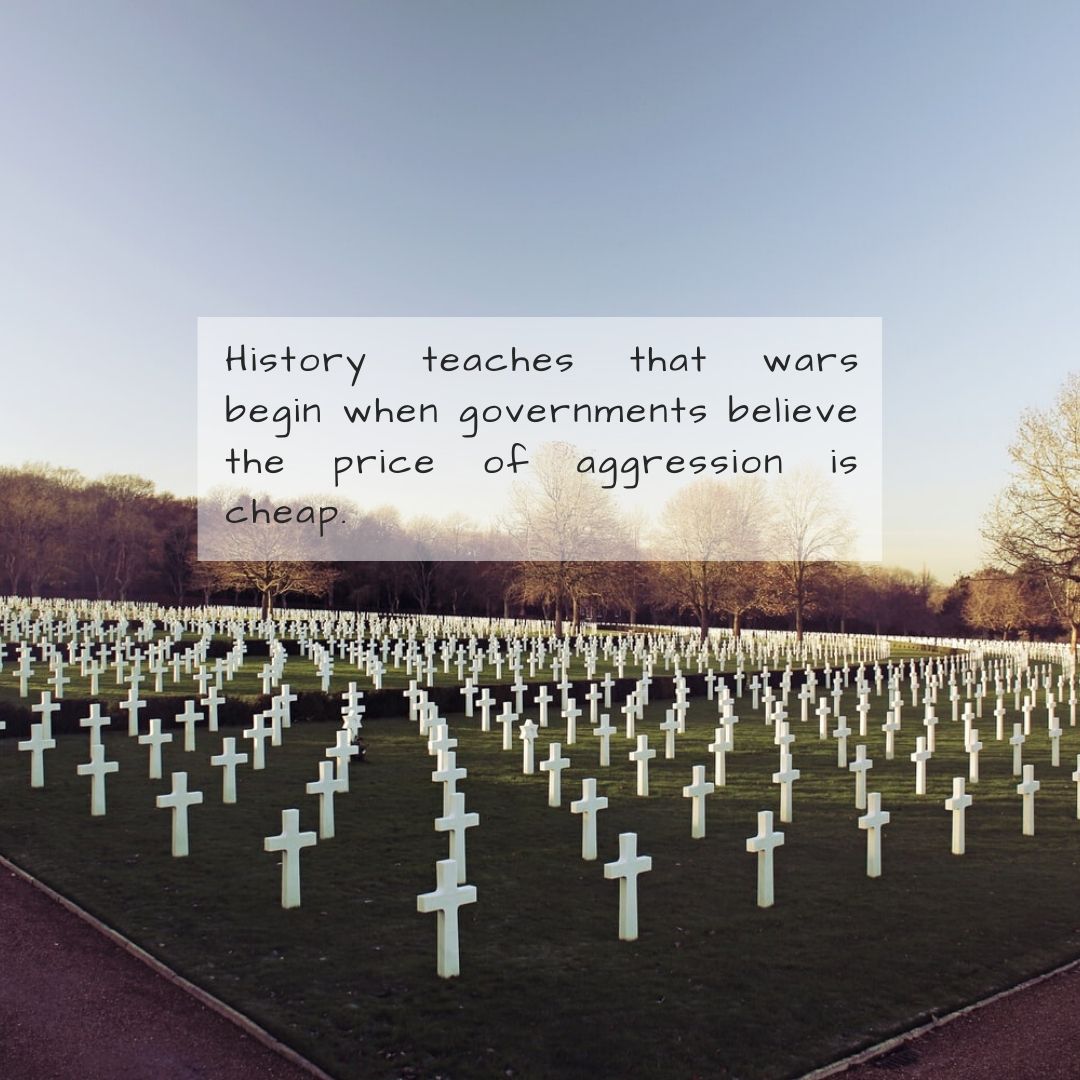 18. War is a severe doctor; but it sometimes heals grievances. 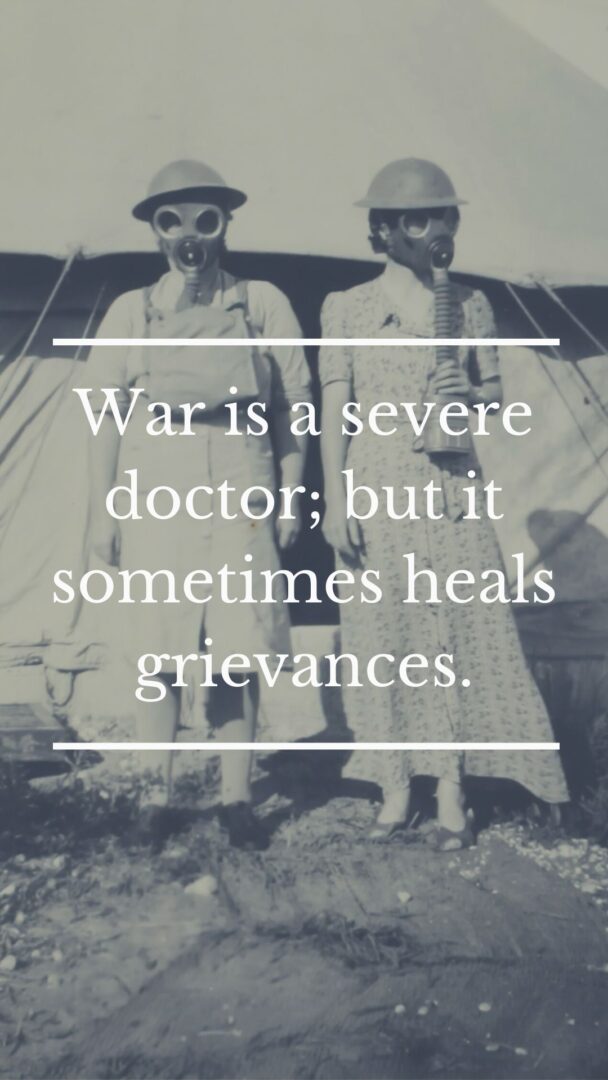 19. War demands sacrifice of the people. It gives only suffering in return. 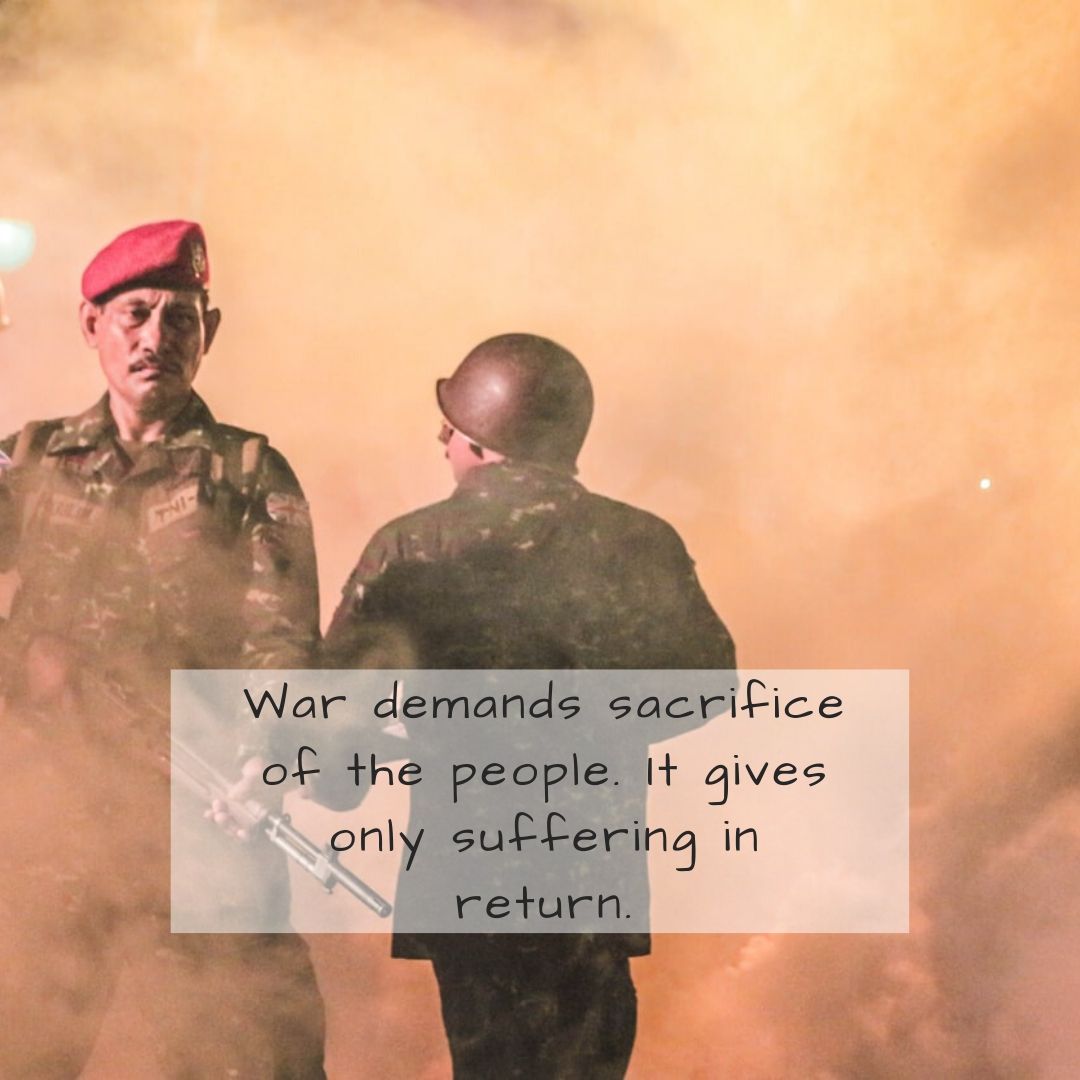 20. To get through a war, a man needs something bigger than himself to fight for 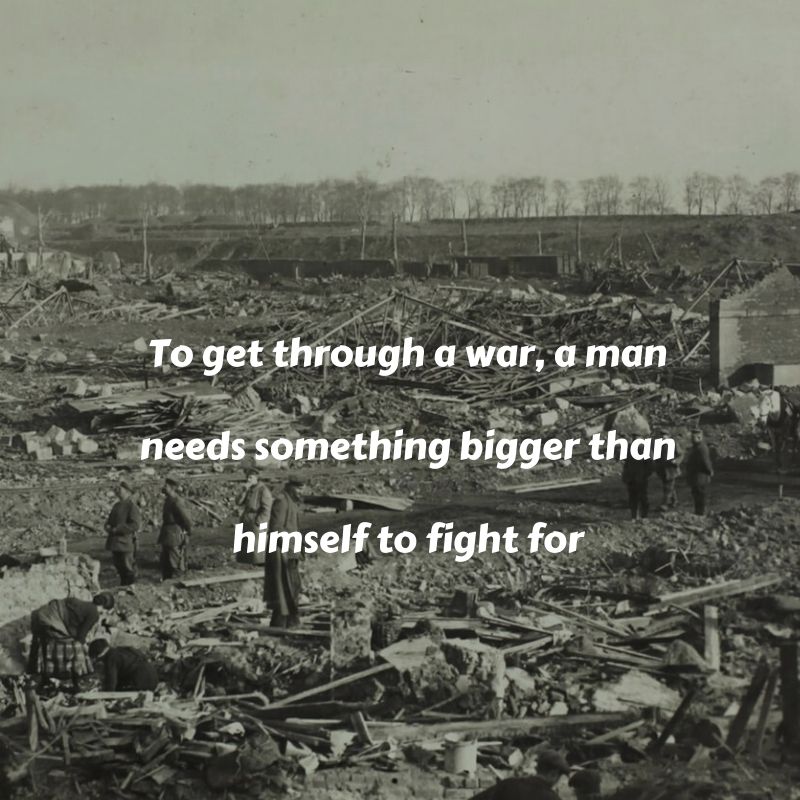 21. “Great is the guilt of an unnecessary war.” – John Adams

23. “Man becomes his most creative during war.” – Clint Eastwood

24. “I have never advocated war except as a means of peace.” – Ulysses S. Grant

25. “Our modern states are preparing for war without even knowing the future enemy.” – Alfred Adler

26. “In war, you win or lose, live or die – and the difference is just an eyelash.” – Douglas MacArthur

28. “The most successful war seldom pays for its losses.” – Thomas Jefferson

29. “Wars are not paid for in wartime, the bill comes later.” – Benjamin Franklin

30. “The supreme art of war is to subdue the enemy without fighting.” – Sun Tzu

31. “I hate war as only a soldier who has lived it can, only as one who has seen its brutality, its futility, its stupidity.” – Dwight D. Eisenhower

32. “The only excuse for war is that we may live in peace unharmed.” – Marcus Tullius Cicero

33. “The first casualty when war comes is truth.” – Hiram Johnson

34. “War is never a solution; it is an aggravation.” – Benjamin Disraeli

36. “There’s this romantic idea that’s built up around war. But the pragmatic view is there are tons of people of my generation who have lost their lives, lost their marriages, or lost their health as a consequence of being sent to wars which could have been avoided.” – Pete Buttigieg

37. “War is only a cowardly escape from the problems of peace.” – Thomas Mann

38. “What is human warfare but just this; an effort to make the laws of God and nature take sides with one party.” – Henry David Thoreau

40. “Once we have a war there is only one thing to do. It must be won. For defeat brings worse things than any that can ever happen in war.” – Ernest Hemingway

41. “The world is full enough of hurts and mischances without wars to multiply them.” – J.R.R. Tolkien
“Wars are poor chisels for carving out peaceful tomorrows.” – Martin Luther King Jr.

42. “War is an ugly thing, but not the ugliest of things. The decayed and degraded state of moral and patriotic feeling which thinks that nothing is worth war is much worse.” – John Stuart Mill

45. “The first and most imperative necessity in war is money, for money means everything else – men, guns, ammunition.” – Ida Tarbell

46. “Every gun that is made, every warship launched, every rocket fired, signifies in the final sense a theft from those who hunger and are not fed, those who are cold and are not clothed.” – Dwight D. Eisenhower

48. “War is a series of catastrophes which result in victory.” – Albert Pike

49. “We are all tourists in history, and irony is what we win in wars.” – Anatole Broyard

50. “The art of war is of vital importance to the state. It is a matter of life and death, a road either to safety or to ruin. Hence it is a subject of inquiry which can on no account be neglected.” – Sun Tzu

51. “We must concentrate not merely on the negative expulsion of war but the positive affirmation of peace.” – Martin Luther King Jr.

52. “It is my conviction that killing under the cloak of war is nothing but an act of murder.” – Albert Einstein

53. “There is nothing that war has ever achieved that we could not better achieve without it.” – Havelock Ellis

54. “If they are going to have war, they ought to take the old men and leave the young to propagate the race.” – Jeannette Rankin

55. “The great questions of the day will not be settled by means of speeches and majority decisions but by iron and blood.” – Otto von Bismarck

57. “If it’s natural to kill, how come men have to go into training to learn how?” – Joan Baez

58. “I’m fed up to the ears with old men dreaming up wars for young men to die in.” – George McGovern

59. “The State thrives on war – unless, of course, it is defeated and crushed – expands on it, glories in it.” – Murray Rothbard

60. “A war is a horrible thing, but it’s also a unifier of countries.” – Clint Eastwood

61. “War is the greatest plague that can afflict humanity, it destroys religion, it destroys states, it destroys families. Any scourge is preferable to it.” – Martin Luther

65. “War will exist until that distant day when the conscientious objector enjoys the same reputation and prestige that the warrior does today.” – John F. Kennedy

66. “War is cruelty. There is no use trying to reform it. The crueler it is, the sooner it will be over.” – William Tecumseh Sherman

67. “Every soldier thinks something of the moral aspects of what he is doing. But all war is immoral and if you let that bother you, you’re not a good soldier.” – Curtis LeMay

68. “War is what happens when language fails.” – Margaret Atwood

69. “The true soldier fights not because he hates what is in front of him, but because he loves what is behind him.” – G.K. Chesterton

50 Cheesy Pizza Jokes And Punts To Brighten Your Day

48 Hot Kate Upton Pics From All Across The Globe

48 Hot Kate Upton Pics From All Across The Globe