The image given below shows a 2×2 matrix with size on the y-axis and speed on the x-axis. Size can be represented as market share, revenue, or units sold. 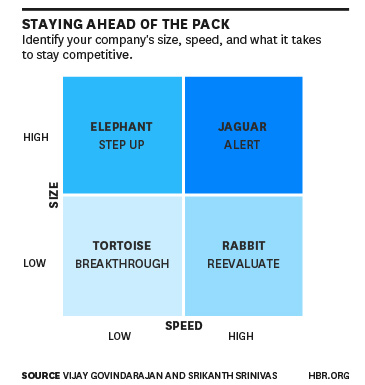 But why is relative speed so important? Because, if you are not faster than the competition, you can get eaten up.

Apple’s iPhone was a jaguar. Big, and years ahead of the competition. It got there through a series of breakthrough innovations: the touchscreen, an integrated smartphone, and the pricing. It was moving fast, but soon it was overtaken by Samsung’s Galaxy. Apple’s slipped from jaguar to elephant rather swiftly.

Samsung’s Galaxy caught up with all that Apple had to offer and added several innovations, the key ones being a bigger screen, better GPS functionality, a range of phones to cover all segments from low-end to high-end, better rendering of websites with flash players, and better working relationships with partners — operating system partners like Google and Android, carriers like Verizon, and retailers like Best Buy.

RIM and Nokia were other jaguars which have been relegated to tortoise quadrant rather rapidly. They were the leaders in the world of smartphones. But they failed to maintain their leadership position. Blame it on their inability to keep pace with innovation: RIM stuck with its physical keyboard for far too long; Nokia stuck with a dated operating system.

Two important lessons that present day jaguars could learn from the experiences of Apple, Nokia and RIM are:

Adapted From :  Finding Your Place in the Competitive Jungle

How To Convince Investors To Fund Your Tech Startup

Why Social LMS Is Better Than Classroom Tools

How To Pace, When To Pause And How Long To Persevere!!!

Whatever You Do You Have To Keep Moving Forward

How To Convince Investors To Fund Your Tech Startup